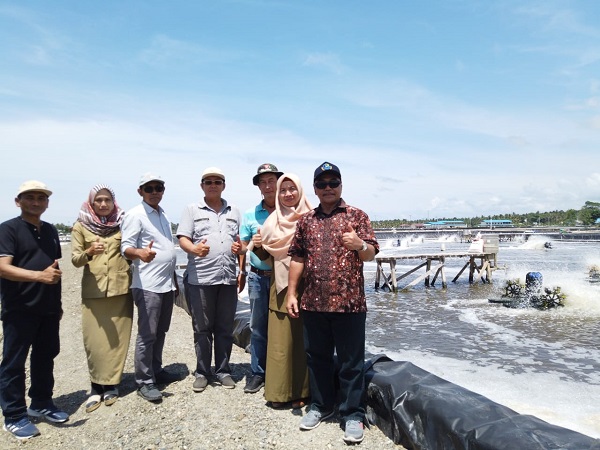 Pasangkayu, Pebruary 14, 2020/Indonesia Media – Indonesian national private companies are interested in the business of shrimp farming after they manage to adopt an approach to regional sustainable agriculture for maximum yields. The Ministry of Fisheries and Marine Affairs (KKP) disseminates intensely or modelling throughout Indonesia, in which one of them is the region of Pasangkayu – North Mamuju, the province of West Sulawesi.

Sustainable shrimp farming is a business model, introduced by the Directorate General of Aquaculture, KKP by allowing an integrated management and environment friendly. The model is effective to handle pest control and diseases since they are under one roof and tight bio-security.

When visiting the farming in Randomayang village, Pasangkayu a few days ago, the Director General of Aquaculture, Slamet Soebjakto said that KKP has targeted an increase of export by 250 percent till 2024. Therefore, Slamet stressed the strategy for bolstering the production of shrimp aquaculture throughout the country, of which one of them is developing the model of sustainable shrimp farming.

“The model of regional development for sustainable shrimp farming proves to be effective in increasing productivity significantly. So the model of technology, such as this (farming), the 250 percent target goal for the next five years, declared by President Joko ‘Jokowi’ Widodo is realistic,” Slamet said.

He reiterated that the model of region-based aquaculture would be effective, assuring that production system will integrate the layout, hatchery, shrimp food management, diseases control and environment. The model enables an increasing productivity up to 5 – 10 tons per hectare. “By 2024, we have set the target of export by 250 percent or an additional national production will reach 578 thousand tons. We have announced the plans for new lands, infrastructure and other facilities. Later, we will actualize by inviting all stakeholders and investors as well,” said Slamet.

He added that this year, shrimp commodity is still the focus of fisheries export development in which the share of Indonesian shrimp achieved by 40 percent of the export value in total in 2018, namely 1,3 billion US Dollar. By bolstering the productivity of aquaculture, the value will increase by 3,25 billion US Dollar.

“I feel happy, we can prove the model of sustainable region-based aquaculture has yielded in maximum and encourage investors, also adopt the type of model. we become more optimistic after investors  fund for the business, and the industry of shrimp farming will grow,” he said.

The model of sustainable region-based aquaculture in Pasangkayu makes use 45 hectares, with an estimated production of shrimp per cycle up top 12 – 14 tons per ponds. Site in the area will grow since there are more investors will fund for the business.

Meanwhile, one of the investors, the President Director of PT Manakara Sakti Abadi, Rudy Hartanto Wibowo stated that the target 250 percent for shrimp export is realistic. He is sure that he will not miss the target. According to him, the key is the seriousness of the stakeholders. He himself is optimistic with the prospect of Indonesian national shrimp farming which will be potential state’s income.

“I believe, (that) all investors will not have doubt anymore about funding for the business of shrimp farming. I think, the business is promising due to the availability of technology, human resources. Infrastructure will also be improved,” said Rudy

He reiterated that Indonesian shrimp producer can only export 18,35 percent out of the whole volume of national shrimp production, to Japan, USA, Europe and China. It means, there is still a big opportunity for an increase of shrimp export. Private producer makes big efforts to increase production to achieve the target. “In principle, we wish to contribute to actualize the program of Indonesian government,” said Rudy. (sl/IM)