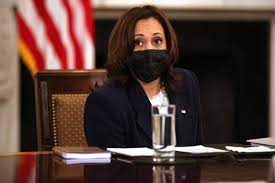 President Joe Biden is tasking Vice President Kamala Harris with overseeing efforts with Central American countries to stem the flow of migrants to the US southern border, the first major issue Biden has assigned directly to his No. 2.

“I asked her, the VP, today, because she’s the
most qualified person to do it, to lead our efforts
with Mexico and the Northern Triangle, and the
countries that can help, need help in stemming the
movement of so many folks, stemming the migration to our southern border,” Biden told reporters ahead
of an immigration meeting in the White House State Dining Room.
“I said when we became a team and got elected that the vice president was going to be the last person
in the room,” he said. “She doesn’t realize that means she gets every assignment.”
The task mimics Biden’s own efforts in 2014 and 2015, when he was asked by then-President Barack
Obama to lead diplomatic efforts in Guatemala, Honduras and El Salvador after a surge of
unaccompanied minors from those countries began arriving in the US.
Migrants are again arriving at the border at increased levels, causing a scramble by the administration to
accommodate them and a political problem for the White House.
“Thank you, Mr. President, for having the confidence in me. There is no question that this is a
challenging situation,” Harris said on Wednesday. “While we are clear that people should not come to
the border now, we also understand that we will enforce the law and that we also — because we can
chew gum and walk at the same time — must address the root causes that cause people to make the
trek, as the President has described, to come here.”
close dialog