13 days and counting. On June 22nd, voters in every borough of New York City will be casting their ballots in their highly-anticipated Primary Election. The conjunction of NYC’s robust campaign finance system (small-dollar contributions from NYC residents are matched by the New York City Campaign Finance Board) and the implementation of term limits have led to a wealth of diverse candidates on the ballot. NYC voters will be selecting a new Mayor, Comptroller, Public Advocate, City Council Members, Borough Presidents, and more!

For the first time ever, NYC voters will be using the innovative

“Ranked Choice Voting” system to cast their ballots. This means that, instead of selecting only their top candidate for each position, they will have the option of selecting and ranking up to five candidates for each elected office. Check out this short video about Ranked Choice Voting, produced by our partner at the Asian American Federation in NYC. APIAVote helped produce it in Bangla, Mandarin, Korean and Tagalog.

While APIAVote is supplementing the work of our local partners such as Minkwon Center for Community Action and APA Voice and the Asian American Federation, they are coordinating and recruiting volunteers for the on the ground direct voter engagement.

“This June, New York will become the most diverse community in the country to introduce Ranked Choice Voting, a new voting system that will allow voters to have more choice and power with their vote. The upcoming primaries represent a critical opportunity to elect a new generation of local leaders that will directly shape and impact the lives of New Yorkers.” said Sandra Choi, Civic Participation Manager at the Minkwon Center for Community Action.

“Our city’s voting electorate must reflect the diversity of our immigrant communities including those who are left behind in the political process because of linguistic, economic and social barriers. MinKwon and our partners at APA VOICE, a coalition of New York’s leading Asian-American community organizations that organize together to increase civic engagement, have been leading research, advocacy and extensive GOTV education and outreach to ensure our community members are prepared to vote with Ranked Choice Voting in the upcoming primary. We look forward to mobilizing our community this June to build a more inclusive and participatory democracy that reflects the most diverse community in the nation.”

Ahmed Butt, Civic Engagement Coordinator at the Asian American Federation noted, “In a few short weeks, New Yorkers will vote in the city’s most consequential local election in a generation. Voters will choose a new mayor and comptroller and will fill two-thirds of City Council seats. This is a pivotal time for our Asian American community, who make up 15% of the city’s population. After a year in which anti-Asian hate has been front-and-center, we now have the opportunity to unite and vote for leaders who will help bring safety to our community and lead our city’s pandemic recovery. Whether you plan to vote by mail, early in-person or at your polling place on Election Day, your vote will make a difference for our Asian American community.”

AAPI voter turnout in 2020 was tremendous, increasing participation by 10% over 2016. This was driven by a big increase in the number of first time voters. Our goal is to convert all these newly engaged voters to turnout 3 times and turn them into lifetime voters to ensure our voices continue to be heard. Voting and actively engaging in how our communities are governed is a critical action to fight against the rise of Anti-Asian violence in NYC and across the country. By turning out in large numbers and voting by June 22, we can elect candidates who will properly resource and enact solutions we can stand behind.

HOW YOU CAN HELP: 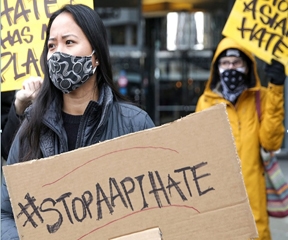 Even as Asian Americans continue to face hate and violence across the country, “the AAPI community overall is all leaning in at this moment and realizing that they can no longer just step back,” Christine was recently quoted saying in a NBC article about the rise of Asian American political candidates this year. “It is significant that in a year without a presidential or midterm election to galvanize voters, three Asian Americans are on the mayoral ballot and considered competitive. We’ve been trying to build a pipeline and create opportunities and provide inspiration for folks that consider running for office,” Christine continued, “But I think now it’s even more important just because of the rise of anti-Asian violence.”

The Cost of Being an ‘Interchangeable Asian’

“At some top companies, Asian Americans are overrepresented in midlevel roles and underrepresented in leadership. The root of this workplace inequality could stem from the all-too-common experience of being confused for someone else.”