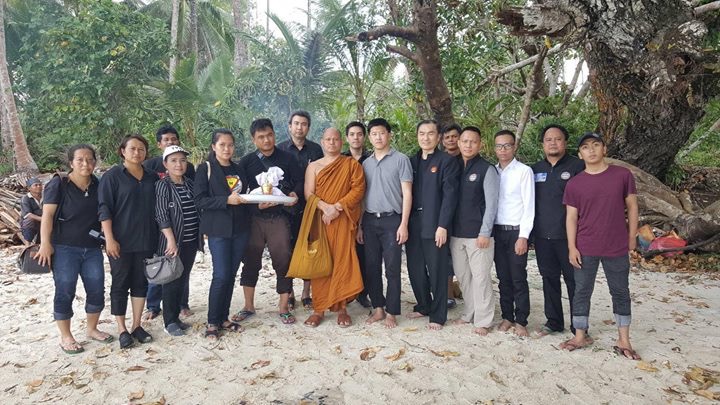 Jakarta, October 6, 2018/Indonesia Media – Thai Prime Minister Prayuth Chan Ocha’s concern about Human Trafficking in the Fishery Sector, of Indonesian village Benjina, Maluku Province has prompted a group visit for further solution especially for those who had lost family members. Since media has published many articles, including the one from the Associated Press (AP) three years ago, Thai government needed to take further and concrete actions. “Prime Minister Prayuth assigned official to bring back the bones of Thai people who were killed in the village. They were either buried or cremated in the village. Therefore, we went to Benjina to take care of (Thai family) loved one’s bones. We prayed in the mass grave after we managed to identify (the corpse),” said a Buddhist Monk Phraprasan Thongchai.

There, in the Indonesian island village of Benjina and the surrounding waters, hundreds of trapped men represent one of the most desperate links criss-crossing between companies and countries in the seafood industry. This intricate web of connections separates the fish we eat from the men who catch it, and obscures a brutal truth: Your seafood may come from slaves. The men the AP interviewed on Benjina were mostly from Myanmar, also known as Burma, one of the poorest countries in the world. They were brought to Indonesia through Thailand and forced to fish. Their catch was then shipped back to Thailand, where it entered the global stream of commerce. After AP published the story, Indonesian government through Ministry of Fisheries and Maritime Affairs proceeded to return the slaves to their home countries. “We spent around 10 hours travelling from Jakarta to Benjina. Since Thai people who worked there for years, failed to return home, they were finally killed. They were slaved to work for ship owner to catch fish which were exported to many countries. There are also slaves from Cambodia, Myanmar, Lao. But most of the slaves from Cambodia, Myanmar, Lao decided to stay in Maluku. Most of them get married with local women. Only Thai people wished to return home,” said Phraprasan Thongchai.

Thai government had taken action when AP’s article went viral, that Indonesian local media followed to publish the story. At that time, a year-long investigation revealed the fact in 2015, namely the practice of trafficking people, Indonesian ministry sent officials to check the facts. the AP talked to more than 40 current and former slaves in Benjina. “Therefore, we visited the village together with Thai government officials, family members of victims, and one electronic media to make sure that there will not be slavery anymore. We know, that ship owners are Thai people also. We can not force them to quit the job, but we need to help them to return home,” said Phraprasan Thongchai. (sl/IM)