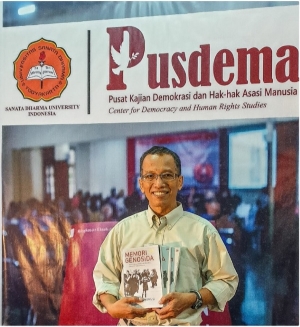 Baskara T. Wardaya is the Director of the Centre for Democracy and Human Rights Studies (PUSDEMA) at Sanata Dharma University in Yogyakarta, Indonesia. In 2017, he participated with a project team of Indonesian educators in the International Conference on Education and the Holocaust, a capacity-building programme organized by UNESCO and the U.S. Holocaust Memorial Museum, which seeks to advance Holocaust and genocide education worldwide.  Dr. Baskara has continued to promote Holocaust and genocide education in Bahasa Indonesia and has now published a book on memory and genocide for Indonesian audiences, entitled Memori Genosida.

Q: Can you explain why you decided to publish a book about genocide and memory, with a particular focus on the Holocaust, in Indonesian? How does this topic resonate with Indonesian audiences?

Q: How does this book project link to your participation in the 2017 International Conference on Education (ICEH) and the Holocaust organized by UNESCO and the U.S. Holocaust Memorial Museum (USHMM)?

A: When in 2017 I attended the ICEH in Washington DC with the other members of my project team, we found that the topics and the methods being used were very interesting and useful. Inspired by the conference, we began to talk about holding a similar project, but within the Indonesian context, especially the Indonesian historical context. We then submitted a proposal for the project to the ICEH committee. After some revisions and discussion, the proposal was accepted. UNESCO and USHMM were willing to help us with advice and finance. We were very grateful. Much of the contents of the book stem from discussions we have had during the seminar and workshop for Indonesian teachers, students and human rights scholars, organized as an immediate follow-up project to our participation in the ICEH. Some of the participants became contributors.

Q: Which themes do you and the contributors highlight and discuss in the book? How do the themes of the book relate to the Indonesian context?

A: The book, titled “Memori Genosida” [English: “Genocide Memory”], presents the reader with multiple perspectives on the Holocaust and genocide, stressing the complexity of related histories. For one, the Holocaust did not happen suddenly. It happened gradually, especially when people began to view those who were different from them as “the other” and began to discriminate against them. Further, those who participated in the violence during the Holocaust were not necessarily “monsters”; they could be ordinary people who saw injustices around them but did nothing. Three, if that is the case, something similar to the Holocaust could happen not only in Europe but also everywhere, including Indonesia. It could happen not only in the 1930s or 1940s, but also today.

As an archipelagic nation, Indonesia is very diverse ethnically, linguistically, religiously, etc. Because of this, Indonesia is at a heightened risk of conflicts, caused by voices that emphasize these differences. We have seen this happening in the past. That is why we need to educate one another to not discriminate against people who are different from us ethnically, linguistically or religiously. We also need to prevent injustices around us before they are too late to stop.

Since some of the contributors to this book work on the impact of the human rights violations that took place in Indonesia during the anti-communist purge of 1965, reading and discussing literature on the Holocaust helps us in putting the violence of the purge into a broader perspective.

The book was presented to Indonesian and international audiences at a virtual book launch on 26 March 2021. Participants from across Indonesia took part in the event, which included presentations by local teachers, lawyers and human rights scholars, including the only female commissioner of the Indonesian National Human Rights Commission.

UNESCO promotes education about the Holocaust and genocide worldwide as part of the Organization’s Global Citizenship Education programme. Within the framework of the International Conference on Education and the Holocaust, UNESCO and the U.S. Holocaust Memorial Museum support education stakeholders around the world to develop and implement context-sensitive educational approaches to deal with violent pasts and prevent genocide. The two training programmes in 2015 and 2017 led to the development of 16 Holocaust and genocide education initiatives in 17 countries. Funded by the Government of Canada, UNESCO and the U.S. Holocaust Memorial Museum are now launching a new project cycle, to be implemented over the next three years. Learn more.