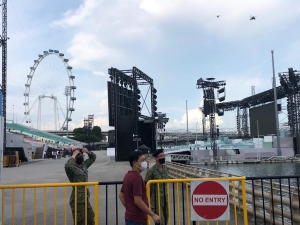 THE month of August has special significance for Asean (Association of South-east Asian
Nations) as three countries celebrate their National Days: Singapore on August 9, Indonesia
on August 17 and Malaysia on August 31.

The celebration of national days strengthens the unity amongst the individuals of a
community and empowers them to seek their roles and responsibility for national integrity
and development; to remember the contributors for their principles, convictions and sacrifice
for others welfare and development and propriety. So postponing the big day is probably
unheard of but because of the prolonged Covid-19 globally, sometimes the impossible
happens.

The city-state of Singapore started the ball rolling by pushing its national day celebrations to
August 21. This was very much in line with the move of easing restrictions, which gave much
indication and rejoice that life is returning back to normal for the people in Singapore.

The major newspapers here reported that the authorities worked to their bones to contain
the spread, coming up with slew of measures and robust implementations. So it seemed all
was in order till the defiant ones decided to test the system. So the end result, it all went on a
tailspin after a sudden outbreak.

The call had to be made, take the gamble or heighten the restrictions. That would also
include carrying out the National Day Parade (NDP) as planned, which could result in
another outbreak. The safety of the people was at stake here, the leaders called the shots;
safety of the people in Singapore took the precedence. And this is how the events unfolded.

UNPREDICTABLE PANDEMIC
Quite honestly, there is no immediate answers to contain the prolonged COVID-19
pandemic, and even Singapore’s Finance Minister Lawrence Wong said that the current
crisis could stretch to four or five years. The 1918 Spanish flu epidemic, which lasted about
two years, gives a model for what might happen, he said.

He also mentioned that new mutant strains of the virus could prolong the pandemic around
the world, concluding: &quot;There are still tremendous uncertainties ahead of us. The bottom line
is that we live in a shared world and no one is safe until everyone is safe. Of course, no

pandemic goes on forever. At some point in time the pandemic will pass, but it may take four
to five years before we finally see the end of the pandemic and the start of a post-COVID
normal.”

Singapore’s latest headaches come with the karaoke lounges (KTVs) wherein in October
2020, the Immigration Authority of Singapore (ICA) made an provision to allow Singaporeans
to be reunited with their foreign partners after being separated due to the on-going
pandemic. It was truly on a compassionate ground where the government recognised the
need to support its citizens. But no one saw the exploitation as Singapore Law Minister, K.
Shanmugan rightfully pointed out as “abuse” that was in link with the swift removal of
boyfriend/girlfriend category under Familial ties lane. So here’s the love story, which clearly
didn’t touch the hearts of many Singaporeans.

The first outbreak is linked with the KTV where the Vietnamese hostess entered Singapore
in February this year on a short-term visit pass via Familial ties lane sponsored by her
Singaporean boyfriend. Being the first case, it had a ripple effect with the growing KTV
cluster of Covid-19 infections.

Mr Shanmugan further added there were many Singaporean sponsors who applied for many
girlfriends and some sponsors were already married to someone else. Some sponsors were
also unable to substantiate their relationship with the travelers. Now, this is quite inventive
but it was definitely short-lived for good. There were several videos that went viral showing
the behind scenes at KTV lounge but only to verify if they were true. But authentic or not,
everyone thought they are going to see the light at the end of the tunnel. And as for the
perpetrators, it might be sometime before they could see the light ever again, end of love
story.

TROUBLING KARAOKE MANIA
So the earlier plan to progressively open as the country’s COVID-19 taskforce revealed that
they’re easing measures “across the board” after successfully keeping the latest wave under
control was postponed. Of note, Singapore Health Minister Ong Ye Kung described KTV
lounge cluster as “very troubling and disappointing”. Clearly, the 4G leaders are doing

whatever they can to bring the nation back to its feet where people could return back to
norms.
The Covid wave didn’t end at KTV but later made it to Jurong Fishery Port, which led to
closure to break the chain of Covid-19 transmission and to enable deep cleaning. But it
didn’t contain at the port but spread to wet markets and stalls too. So the ripple effect was
greater, damage done. One of the root causes of the Jurong Port outbreak was due to
lapses of mask wearing.

For those who were adhering to the rules and carried out the safe distancing measures, they
were livid. For business owners, especially for F&amp;B, this was again a hard hit. On July 23,
the Ministry of Finance (MOF) announced  a $1.1 billion support package to help cushion
workers and businesses  from the impact of  phase two (heightened alert) measures  in place
from July 22 to Aug 18. This will readily assist the hardest hit sector giving them an extended
lifeline for a period of time.

While the war with Covid-19 continues, Singapore is highly optimistic that life will be back to
normal sooner than later. The aim is to vaccine 2 in 3 residents against Covid-19 by National
Day. According to the latest figures, a total of 7,365,873 doses have been administered in
Singapore. On record, more than 3.1 million people have been fully vaccinated as at July 26;
that’s 55 percent of the total Singapore population. So in order for the nation to hit its target
of vaccinating two-thirds, around 668,000 people have to be fully vaccinated.

PUSHING FOR VACCINATIONS
And while Singapore is likely to be ahead of the curve in vaccinations, most other people in
the world are not, say experts. Singapore authorities plan to get everyone in the country who
is eligible for vaccination to be inoculated by the third quarter of 2021. During this period of
pandemic limbo, life within Singapore may go back almost to normal but other countries may still
suffer outbreaks and be subject to control measures that Singapore has relaxed.

Keep fingers crossed. In almost every certainty, a perfect storm with the  coronavirus  appears to
be brewing across the Asia-Pacific region: surges in the highly contagious delta variant

combined with slow vaccination uptake. Tight vaccine supplies are a major factor and
experts caution that unless most of the global population is vaccinated, and richer countries
share more of their  vaccines , the world will face a far longer bout with the coronavirus than
anticipated.

The American administration has  pledged  to donate more than 80 million doses to countries
in need, with 23 million going to Asia. Some 3 million doses of Moderna arrived in Indonesia
from the USA on July 11 — but the rollout needs to significantly increase in order to meet the
WHO’s target to vaccinate at least 10% of every country in the world by the end of
September.

For the pandemic to end and the virus to become manageable on a global level and COVID-
19 to become manageable as with other coronaviruses, between 10 and 12 billion doses
need to be administered around the world. That number currently stands at around 3.7
billion, according to the WHO (World Health Organisation).

Keep fingers crossed, again. The best-case scenario is that through these vaccination efforts
that by the end of next year we have produced enough vaccines that can vaccinate a
majority of the population worldwide, and that vaccination is effective in terms of preventing
severe cases of death.

Previously most of us were more optimistic about how and when the pandemic is going to
end. But now, with that divide in terms of vaccine access, in terms of the strategies adopted
by countries, in terms of the continued emergence of the new variants, the optimism appears
to be evaporating. So, let’s keep fingers crossed.