The House of Representatives voted Thursday to approve a roughly $480 billion package to deliver aid to small businesses and hospitals and expand Covid-19 testing, the latest attempt by lawmakers to blunt the devastating impact of the pandemic.

The vote was 388-5. The measure passed the Senate earlier this week and will now go to President
Donald Trump, who has expressed support for the legislation and indicated that he will sign it.
The total price tag of the bill is approximately $484 billion. It will add to the already historic levels of
spending to deal with the pandemic by authorizing an additional $310 billion for the Paycheck Protection
Program, which was set up to help small businesses struggling from the economic deep freeze triggered
by coronavirus. Funding for the program ran dry earlier this month, prompting an outcry from the
business community.
In addition, the legislation provides $75 billion for hospitals and health care providers to address
coronavirus expenses and lost revenue and $25 billion to facilitate and expand Covid-19 testing. The
increased funding for testing comes at a time when there is widespread recognition that testing capacity
must increase and improve as states consider when to reopen businesses and lift stay-at-home orders.
The legislation, though referred to as an “interim” measure by lawmakers, amounts to the latest historic
effort by Washington to prop up the economy on the heels of a more than $2 trillion rescue package
along with other relief measures already approved by Congress.

The Democratic-led House voted earlier on Thursday to establish a new panel with broad authority to
oversee the federal response to the coronavirus pandemic.
The vote was 212-182, with the committee approved along party lines.
The panel, which will be a select investigative subcommittee of the House Oversight Committee, will
have far-reaching power to investigate how the trillions of dollars already approved by Congress for
coronavirus relief are being used. It will be able to issue subpoenas, review US preparedness for the
crisis and examine decisions about the crisis within the administration.
According to the text of the resolution establishing the panel, it is authorized to “conduct a full and
complete investigation” and “issue a final report to the House of its findings” on a wide array of aspects
of the federal response to the pandemic, including “executive branch policies, deliberations, decisions,
activities, and internal and external communications related to the coronavirus crisis.”
Congressional Republicans have argued another committee dedicated to the coronavirus response is
unnecessary given other oversight mechanisms set in place to monitor the implementation of the $2.2
trillion CARES Act and other relief measures.
“The Congress already has significant oversight tools at our disposal,” said Rep. Tom Cole of
Oklahoma, the top Republican on the House Rules Committee. 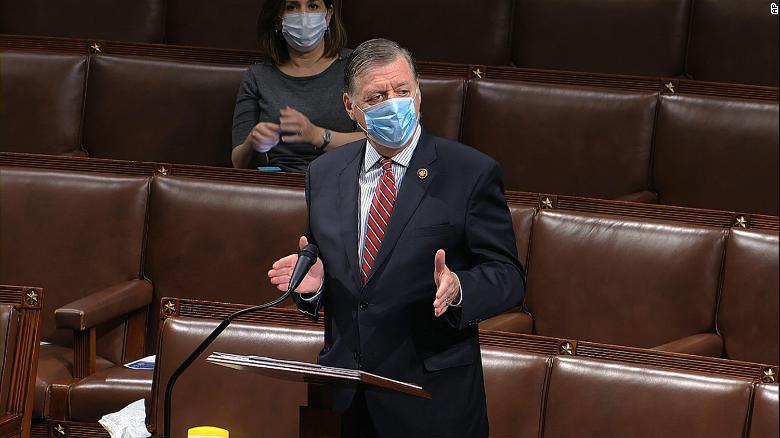 In this image from video, Rep. Tom Cole, an Oklahoma Republican, speaks Thursday on the floor of the
House of Representatives at the U.S. Capitol in Washington.
“It’s entirely plausible for one to conclude that this new select committee will simply turn into yet another
partisan witch hunt aimed at damaging the President,” he added.
Some Republicans on Thursday also raised concerns with House Speaker Nancy Pelosi’s selection for
committee chairman, Majority Whip Jim Clyburn, a South Carolina Democrat, because he is a staunch
supporter of Joe Biden’s presidential campaign.
“I respect the chair greatly. He is one of the best political minds I know. Joe Biden will tell you that,”
House Minority Leader Kevin McCarthy, a California Republican, said of Clyburn, pushing back on the
choice for him to lead the committee. “You see, our dear friend Congressman Clyburn, he should be
credited for getting Joe Biden the nomination.” Clyburn endorsed Biden before the South Carolina
primary.
Pelosi has repeatedly rebutted the idea that the committee will be a partisan exercise, saying oversight
of the Trump administration’s initial response to the pandemic can’t wait until an after-action review.
“This isn’t about assigning blame, this is about taking responsibility and to be able to answer for what we
have put forth that it really did work,” she said on the House floor ahead of the vote.
She added that the committee “will be laser-focused on ensuring that taxpayer money goes to workers’
paychecks and benefits and will ensure that the federal response is based on the best possible science
and guided by health experts and that the money invested is not being exploited by profiteers and price
gougers.”
The committee will consist of seven Democrats and five Republicans, according to the text of the
resolution. It will probe the “efficiency, effectiveness, equity and transparency” of taxpayer funds used to
respond to the crisis and will investigate reports of waste, fraud and abuse of funds being spent.
It will also be able to study the economic impact and disparate impacts of the crisis on different
communities.

A different kind of voting

As a sign of the pandemic’s effect on the chamber, voting was be altered to allow for more social
distancing and a scheduled cleaning of the chamber between votes. The Capitol physician and House
sergeant-at-arms sent out recommendations to lawmakers and their staff, including to wear masks.
A number of lawmakers could be seen wearing masks on the House floor during debate ahead of the
vote, but some members opted not to wear masks while speaking.
Pelosi wore a white face covering while sitting at the back of the chamber, but she removed it to speak
on the floor, then wiped down the lectern after she spoke. 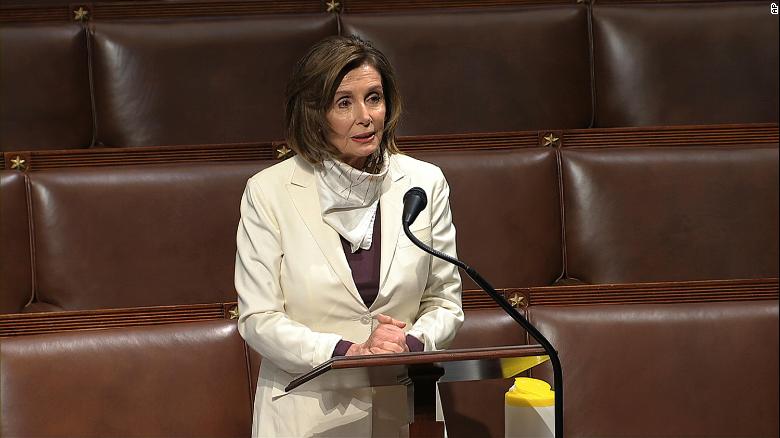 In this image from video, House Speaker Nancy Pelosi of California, speaks Thursday morning on the
floor of the House of Representatives at the US Capitol in Washington.
At one point, House Rules committee chair Jim McGovern, a Massachusetts Democrat, looked over at
the GOP side where a handful of members weren’t wearing masks, and reminded the members that the
Capitol physician’s office recommended face coverings while on the chamber floor.
Still, a few members were spotted sitting on the House floor without wearing masks, including
Republican Reps. Jim Jordan of Ohio, Jody Hice of Georgia, Cathy McMorris Rodgers of Washington
and Louie Gohmert of Texas, who were all maskless for at least part of the time Thursday morning.
In the chamber, there were signs on the chairs where members are allowed to sit, ensuring they are
spread out on the floor. The galleries were empty and remain closed to visitors.
Several lawmakers have contracted the virus since March and members have become increasingly
reluctant to travel across the country to Washington, DC, for votes. But in recent days, some lawmakers,
especially Republicans, have expressed unease with being away from Washington and have called for
members to return to the Capitol to deal with legislative business.
House Majority Leader Steny Hoyer said Tuesday on a call with reporters that congressional leaders
were “asking every member to return who can return, and we hope that that is a large number.”

What’s next for coronavirus aid

Lawmakers from both parties, as well as Trump, are already looking ahead to the next steps the federal
government can take in response to the coronavirus pandemic.
The President outlined some of his upcoming priorities in a tweet earlier in the week signaling his
support for the latest legislative package.
“After I sign this Bill, we will begin discussions on the next Legislative Initiative with fiscal relief … to
State/Local Governments for lost revenues from COVID 19, much needed Infrastructure Investments for
Bridges, Tunnels, Broadband, Tax Incentives for Restaurants, Entertainment, Sports, and Payroll Tax
Cuts to increase Economic Growth,” Trump tweeted.
Senate Democratic Leader Chuck Schumer predicted on Wednesday that there will be a “big, broad,
bold COVID 4.” He added that some of the Democratic priorities include funding for state and local
governments, election reform, money for housing and the postal service.
It is unclear when a next legislative package could materialize, as well as what appetite there will be
particularly among Republican lawmakers to continue to green-light such massive and historic levels of
government spending.
Senate Majority Leader Mitch McConnell cautioned on Wednesday that “it’s time to begin to think about
the amount of debt we’re adding to our country and the future impact of that.”
He predicted the Senate will not try to pass another rescue package by unanimous consent until the
Senate is back in session with “full participation.”
McConnell added he believes the Senate should be “a little more cautious” moving forward on funding.
“Let’s see how things are working. We’ve never been here before. This is totally uncharted territory
. We’re looking how this is impacting all of our country on a day to day basis,” he said ( CNN / IM )