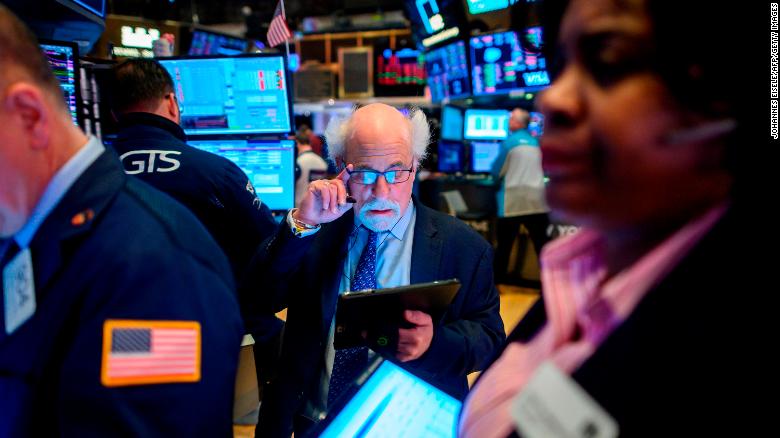 Traders work during the opening bell at the New York Stock Exchange (NYSE) on February 27, 2020 at Wall Street in New York City. – Wall Street stocks opened sharply lower Thursday, joining a sell-off in most global bourses on fears the coronavirus will grow into a significant international health crisis.
About five minutes into trading, the Dow Jones Industrial Average was down 1.8 percent, or about 480 points. The blue-chip index has fallen the last five days. (Photo by Johannes EISELE / AFP) (Photo by JOHANNES EISELE/AFP via Getty Images)

US stocks again sold off sharply on Thursday as worries about coronavirus mounted. The S&P 500 posted its worst day since August 18, 2011, and the three main indexes fell into correction territory. Stocks are on track for their worst week since the financial crisis.

The Dow (INDU) dropped 1,191 points, or 4.4% in its worst one-day point drop in history.
The index has fallen more than 10% below its most-recent peak, putting it in correction.
The S&P 500 (SPX) closed down 4.4% and finished the day below the 3,000 point mark. The index is
also in correction territory.
The Nasdaq Composite (COMP) ended down 4.6%, more than 10% below its latest peak.
All three indexes are on track for their worst week since the fall of 2008, the midst of the financial crisis.
In the United Kingdom, the FTSE 100 (UKX) also fell into correction territory Thursday. This is the
market’s first correction since December 2018.
Stocks still aren’t all that close to a bear market, which is defined as 20% or more below the most recent
peak. The S&P 500 is 12% below its peak.
Global equities have been selling off around the world all week as investors fret about the spread of the
virus. In the United States, stocks spent all of Thursday in the red, despite a short-lived rebound around
midday during which the S&P and the Nasdaq briefly emerged from correction.
“The game has changed with Italy and also with the new case in California,” said Keith Buchanan,
portfolio manager at GLOBALT Investments, in reference to the latest coronavirus cases.
That said, investors would do well to remember that a “10% pullback after the kind of run US equities
have been having is not the worst scenario,” Buchanan said.
Still, safe haven investments like bonds are up on Thursday and the 10-year US Treasury yield fell to a
new all-time below 1.28%. Bond yields and prices move in opposition to each other.
In the energy space, US oil prices fell yet again as investors worries about a drop in demand. US oil
futures settled down 3.4% at $47.09 a barrel.
Worries about the coronavirus outbreak mounted this week, with the US Centers for Disease Control
and Prevention saying it expects cases in the United States to rise. The virus has now infected more
than 82,000 people worldwide, with the vast majority of cases in China.
Corporations continue to warn that they won’t meet their first quarter earnings
targets. Microsoft (MSFT) announced that late Wednesday. Goldman Sachs (GS) said in a report
Thursday that it now thinks US companies will generate zero earnings in 2020.
“What’s even more disconcerting is that the news headlines haven’t been all that bad yet,” said Paul
Hickey of Bespoke Investment Group. “Right now, it’s the fear of what could happen that’s driving the
markets rather than what is actually happening.”
Indeed, the US economy is thought to be relatively more resilient against the effects of the virus as it is
not as reliant on trade as its peers. The second reading of fourth quarter GDP left growth unchanged at
2.1%.( CNN / IM )