Donald Trump on Wednesday refused to say he would accept the result of the presidential election if he loses to Hillary Clinton, raising the possibility of an extraordinary departure from principles that have underpinned American democracy for more than two centuries.

“I will look at it at the time,” Trump said when asked during the final presidential debate whether he would concede if he loses on November 8, following his claims that the election is “rigged” against him.
He added: “I will keep you in suspense.”
The comments at the Las Vegas showdown marked a stunning moment that has never been seen in the weeks before a modern presidential election. The stance threatens to cast doubt on one of the fundamental principles of American politics — the peaceful, undisputed transfer of power from one president to a successor who is recognized as legitimate after winning an election.
Trump’s debate performance could doom his chance to win over any remaining undecided voters at this late stage in the campaign. His comments about the election results came during a debate in which he spoke of “hombres,” language that could offend Latinos. And he referred to Clinton as a “nasty woman.”
The election remarks expose a divide with Republican vice presidential nominee Mike Pence, who told CNN’s Wolf Blitzer before the debate, “We’ll certainly accept the outcome of this election.”
CNN Reality Check
Trump’s campaign manager, Kellyanne Conway, told CNN’s Dana Bash after the debate that Trump will “accept the results of the election because he’s going to win the election.”
Democratic nominee Hillary Clinton, who is leading Trump in most polls, said her competitor’s remarks were “horrifying” and accused him of taking refuge in the idea that any event that turns out against him — even an Emmy award that goes to a rival — is “rigged.” 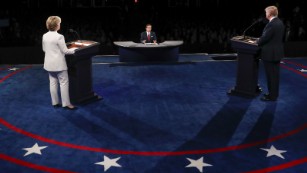 “That is not the way our democracy works,” Clinton said. “We’ve been around for 240 years. We have had free and fair elections. We’ve accepted the outcomes when we may not have liked them. And that is what is expected of anyone standing on a debate stage during a general election.”

She continued: “He is denigrating — he’s talking down — our democracy. And I for one, am appalled that somebody who is the nominee of one of our two major parties would take that kind of position.”
Trump’s remark about the election result is certain to dominate the aftermath of the debate with only 19 days to go before the election, and it seemed likely to overshadow the GOP’s nominee’s strongest performance in any of the three presidential debates.
A CNN/ORC instant poll found 52% of debate watchers viewed Clinton as the winner compared to 39% who felt the same about Trump.
Trump didn’t have much margin for error going into the debate. He’s down eight points in the latest CNN Poll of Polls and is nearly out of time to launch what would have to be one of the most remarkable comebacks of modern times.
A new edition of the CNN electoral map on Wednesday moved two key swing states, Florida and Nevada, to “lean Democrat.” Two other states that have voted almost exclusively Republican for decades, Utah and Arizona, are now considered battlegrounds.

The showdown began in a more civil and calm way than the two previous debates, in which Trump and Clinton repeatedly flung sharp, bitter jabs at one another. He was far more disciplined for much of the debate, and did his best to avoid taking Clinton’s bait, showing restraint as he and Clinton debated the Supreme Court, the Second Amendment, abortion and the economy.
The billionaire reality star-turned-politicians did a better job than in the first two debates of prosecuting Clinton’s weaknesses, lambasting her over her record as secretary of state and the controversy over her private email server, and painting her as the symptom of a tired political establishment who had achieved nothing in her 30 years in public life.
But Trump seemed to lose his cool as the debate went on, harshly criticizing Clinton and occasionally getting testy with the debate moderator, Chris Wallace of Fox News. The debate began to take a turn when Trump and Clinton clashed over the Republican nominee’s relationship with Russian President Vladimir Putin.
Clinton blasted Trump as a “puppet” of Putin and directly called on him to condemn what she said was a Russian effort to use cyberattacks to influence the election in her opponent’s favor.
Trump replied that Putin had no respect for Clinton or President Barack Obama. 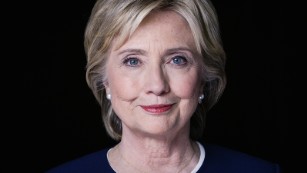 “That’s because he would rather have a puppet as president of the United States,” Clinton said, implying that Putin wanted Trump to win the election.

“No puppet. You are the puppet,” Trump said.
Trump said he had never met Putin but allowed that the Russian leader had said nice things about him, and said it would be good if Washington and Moscow worked together to fight ISIS.
But he added: “This is not my best friend.”
Clinton and Trump also bitterly sparred over the theme of who is qualified to be president. Wallace pressed Trump on why so many women had come forward to accuse him of sexual assault if the allegations were not true.
Trump said the claims had been “largely debunked.”
“I think they want either fame or her campaign did it,” Trump said, referring to the women that came forward after he said at the last debate that he had never been abusive to any women. 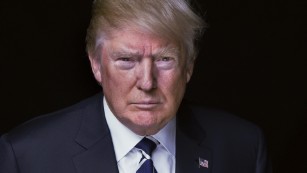 Clinton noted that Trump had implied at several rallies that he could not have made inappropriate advances toward the women because they were not sufficiently attractive.

Trump wrongly denied that he had ever made such a remark.
“Donald thinks belittling women makes him bigger. He goes after their dignity and their self worth,” Clinton said.

Clinton said that Trump’s treatment of women was part of pattern of behavior that saw him insult a disabled reporter, go after the parents of a fallen Muslim soldier and question the impartiality of an American judge of Mexican descent.
She said such tactics were in line with a divisive and very “dangerous vision of our country.” ( CNN / IM )