BP PLC is pushing to fix its runaway Gulf oil well by July 27, possibly weeks before the deadline the company is discussing publicly, in a bid to show investors it has capped its ballooning financial liabilities, according to company officials. 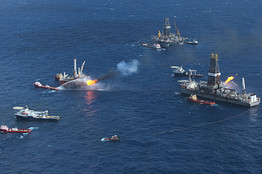 At the same time, BP is readying a series of backup plans in case its current operations go awry. These include connecting the rogue well to existing pipelines in two nearby underwater gas and oil fields, according to company and administration officials.

Much of the additional planning has been pushed by the U.S. government, which has urged BP to develop what one official called the “backup to the backup plan.” Both BP and the federal government are concentrating on their next steps, particularly because of uncertainty caused by the imminent hurricane season and the protracted political and financial damage caused by the endless spill.

Both BP and the Coast Guard continue to state publicly they’re aiming to have a fix in place in early to mid-August. BP has discussed its backup plans only with administration officials, who in turn have briefed President Barack Obama.

The July 27 target date is the day the company is expected to report second-quarter earnings and will speak to investors. BP also wants to show progress by July 20, the day U.K. Prime Minister David Cameron is scheduled to visit the White House.

“In a perfect world with no interruptions, it’s possible to be ready to stop the well between July 20 and July 27,” said the head of BP’s Gulf Coast restoration unit, managing director Bob Dudley, in an interview. He added that this “perfect case” is threatened by the hurricane season and is “unlikely.”

On Wednesday, on a visit to the Discoverer Enterprise, the ship that’s collecting oil from the well, Mr. Dudley got word of a nine-day period of clear weather starting Friday, a period that could prove critical to the effort.

BP is drilling two relief wells through which it will pump material designed to seal the leaking well. One is now 12 feet horizontally and 300 feet vertically from the target spot.

Billy Brown, president of Blackhawk Specialty Tools, a BP contractor helping with the relief-well process, said Wednesday the effort is progressing ahead of schedule.

Mindful of prior snafus, BP has quietly crafted backup plans. The first would force spewing oil to a depleted gas field on the ocean floor two miles away. The second would move the oil to an existing underwater oil field nine miles away. Both require laying flow lines, either flexible or hard steel piping, to connect the leaking well to existing wellheads on these older sites.

Shortly after the Deepwater Horizon accident, BP began drilling relief wells in hopes of stopping the flow of oil.

The engineers described their plans at a seven-hour meeting last week featuring BP engineers and Energy Secretary Steve Chu, held at BP’s Houston crisis center. Mr. Chu said he told them: “Force yourself to think each one will fail.” In an interview, he added: “We’re in new territory full of perils, and nothing is a slam dunk.”

Flying by helicopter to the ship collecting oil, the two men discussed the backup options. All around the ship, 43 miles offshore, the ocean was tinged orange.

The stakes are huge for BP, which has lost nearly half of its market capitalization since the explosion aboard the Deepwater Horizon rig April 20.

The company’s board is setting up a “Gulf of Mexico” committee for a few directors to delve deeply into the disaster’s safety and financial implications.

When they announce earnings July 27, BP officials hope to provide investors with more information on the estimated liabilities from the Gulf spill.

One official said the company wants to be able to describe the oil spill as finite, not infinite, a moment that would allow it to start calculating the total potential liabilities under U.S. law.

To prepare Prime Minister Cameron to speak with Mr. Obama about one of the U.K.’s largest companies, British Ambassador to the U.S. Nigel Sheinwald last Friday attended BP briefings in Houston and New Orleans and then toured the damaged Florida coast. He also met Coast Guard officials.

Support ships are seen near the Discoverer Enterprise drilling rig, right, as they continue the effort to recover oil from the Deepwater Horizon spill site on July 3, 2010 in the Gulf of Mexico off the coast of Louisiana

At Wednesday’s trip to the spill site, Mr. Dudley and Adm. Allen evaluated a prospect for controlling the spill–a newly designed cap to replace the leaky one currently directing oil to ships on the surface.

The risk: removing the old cap could exacerbate the spill in the short run.

At the administration’s prodding, BP created a new device called an “autonomous subsea dispersant system.” Environmental Protection Agency head Lisa Jackson told BP to create such a capability to monitor and measure chemicals used underwater to break up the oil. The large volume of dispersants used has concerned scientists and some government officials.

In recent days, the company has installed new battery-powered equipment on the ocean floor that will inject dispersant into the flowing well. Typically, the dispersants are controlled by ships on the surface, but they may have to move if storms hit.

Mr. Hostler, a former senior BP executive, had faced accusations from U.S. lawmakers that efforts to cut costs put the integrity of the pipeline at risk.

A spokesperson for Alyeska couldn’t be reached for comment.

–Angel Gonzalez and Guy Chazan contributed to this article.