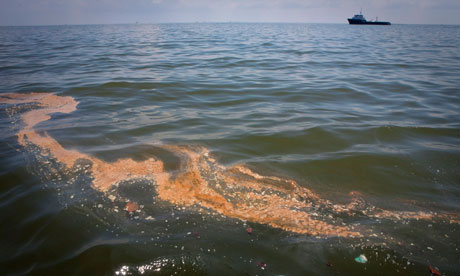 New London, Connecticut (CNN) — It may be hard to fathom, but even with gallons of oil spewing every minute from BP’s broken well head in the Gulf of Mexico, not all the oil pollution in the Gulf is BP’s fault.

First, blame Mother Nature. And that’s actually good news, but we’ll get back to that.

Second blame many of the ships that criss-cross that area.

Right now, the Coast Guard’s lone forensic evidence laboratory is working almost exclusively on the BP oil spill. Wayne Gronlund is the manager of Coast Guard Marine Safety Lab in New London, Connecticut. The name is a misnomer — the lab focuses solely on oil spills and where they come from — and the biggest oil spill in U.S. history is keeping the lab’s scientists very busy.

“Ultimately there has to be a liability established for the cleanup and any penalties assessed so we are identifying the oil as it makes the shoreline to see if matches the Deepwater Horizon or not,” Gronlund said.

The Coast Guard gave CNN exclusive access to Gronlund’s lab, and watching its scientists at work is much like watching an episode of what could be the latest in CBS’s franchise of forensics investigation shows — “CSI: Gulf Oil Spill” (cue song by The Who — maybe “Sea and Sand” from Tommy or “I Can See For Miles and Miles”).

But even though many millions of gallons of crude oil have leaked into the Gulf, much of what is washing up on beaches near in and around the Gulf is not from the Deepwater Horizon spill.

“We’ve done a number of tarballs from Florida, Key West, Miami and so forth, none of which so far have matched the Deepwater Horizon,” Gronlund said. “The tarballs that have been found on the beach in Florida are fuel oil.”

Fuel oil — that means the oil comes from ships, not crude oil from a broken deep sea oil well.

It’s happened before. When the Exxon Valdez spilled 10 million gallons of crude oil into Alaska’s Prince William Sound in 1989, the Coast Guard sent mobile oil analysis systems to the area. They found that half of samples they tested were oil that did not come from the Exxon Valdez.

Why might other ships spill oil? Coast Guard officials said some may have an undetected leak. Others, officials surmise, may be purposely spilling waste oil and dirty oil-laced bilge water into areas already fouled by a major spill hoping not to get caught. Dumping like that is cheaper than having tanks pumped out and cleaned properly according to government regulations when they get to shore. But if they are caught illegally dumping they could face fines above $1 million.

So far the Coast Guard doesn’t know exactly where the oil in Florida came from, but Gronlund said foul play is a possibility.

And the dishonest shippers do often get caught. Coast Guard inspectors will board ships when they come into port. They will obtain a sample of oil from the ship’s tank, send it to Gronlund’s lab where his scientists can compare the oil in the sample to the oil found on the shore. If they match, it doesn’t matter why the oil leaked out — accidentally or not. The ship’s owners are responsible. Gronlund’s chemists often have to testify in court about the oil they test.

That’s one reason the Coast Guard is so busy gathering samples and analyzing them. After the Exxon Valdez spill, a court ruled Exxon was liable for more than $5.2 billion in damages. The company appealed three times, and the damages they had to pay were greatly reduced.

With solid scientific proof of where the oil in the Gulf is coming from, BP and the people who claim they suffered damages from the spill will have less to argue about in court.

Now back to Mother Nature.

Some of the oil in the Gulf is natural seepage from the sea floor. The Coast Guard’s head of research and development, Capt. Matt Sisson, explained that in the Gulf and other oil-rich spots in the world, crude oil bubbles up through the sea floor and into the Gulf Waters.

And that should be good news, because for millennia, as long as oil’s been naturally leaking into the Gulf, organisms have been evolving to deal with that oil. With microbes already feeding on crude oil in the Gulf of Mexico, that could be key to helping the Gulf make a long-term, permanent recovery.