Out with style. In with results. It’s simple reasoning for the Netherlands’ berth in Sunday’s World Cup final. 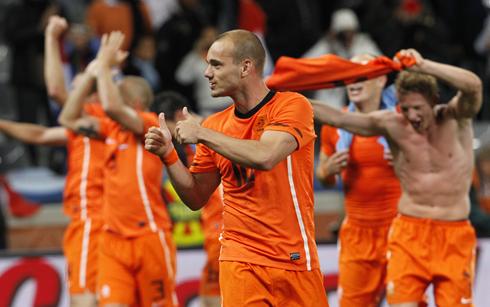 Known for a free-flowing and entertaining brand of soccer the Dutch call “total football,” the Oranje have been one of the world’s most entertaining teams for nearly 30 years.

The reward for total football? One European title and no World Cup championships.

No longer. Under the tutelage of coach Bert van Marwijk, this Dutch team has a 25-game unbeaten streak.

Disciplined against staunch Brazil and skilled in an offensive brawl with Uruguay, van Marwijk’s team has set in place a straightforward, tactical approach on the field, playing a 4-2-1-3 formation. The formation encourages four players (1-3) to attack freely, while the defending six (4-2) keep a structured backing.

Netherlands’ strength comes from its three forwards: Dirk Kuyt, Robin van Persie and Arjen Robben, who are orchestrated by the relentless Wesley Sneijder. An attacking central midfielder who plays for Inter Milan, Sneijder is tied for most goals in the tournament with five.

The style is different but effective. The left-footed Robben attacks down the right flank, cutting inside often to test opponents with his diabolical favored foot. Kuyt– the unsung hero of the four – has picked apart defenses with pinpoint crossing from the left. The two spread the opposition, allowing Sneijder and van Persie to wreak havoc in the middle.

Total football, developed by Ajax and Dutch national team coach Rinus Michels in the early 1970’s, hinges on the ability of every player on the field to adapt to different positions and responsibilities depending on the situation. Players in a total football system change roles constantly, and it’s not unusual to see defenders and strikers switching positions intermittently.

Total football is offense-oriented and can create defensive problems if players fail to cover positions.

The Dutch have a history of infighting. Van Persie and Sneijder have a tumultuous relationship dating to an on-field spat about who should have taken a free kick in the 2008 European Championship quarterfinal loss to Russia.

But van Marwijk has tended his Oranje flock dutifully –keeping egos and tempers in check.

The Dutch have scored 12 goals – four times their total from the 2006 World Cup. Of those 12, nine have come from Sneijder, Kuyt, van Persie and Robben.

But their most impressive goal – and perhaps the best goal of the tournament – came Tuesday off the boot of captain Giovanni van Bronckhorst, who will retire after the final.

“We know we can play football,” said van Bronckhorst, whose 35-yard rocket opened the scoring in the 3-2 semifinal win. “To be mentally strong is now most important.”

The Netherlands are saying the right things and playing the right way. Van Persie says he’s not distracted by the emotion of being in a final. “I will only realize it looking back,” he said. “Now I have this tunnel vision, and you just do what you have to do.”