Twenty years ago, the world had about 1.1 billion Muslims. Twenty years from now, it will have about twice as many – and they’ll represent more than a quarter of all people on earth, according to a new study released Thursday.

Pakistan will overtake Indonesia as home of the largest number of Muslims, as its population pushes over 256 million, the Pew Forum on Religion & Public Life projects.

The number of Muslims in the United States will more than double, to 6.2 million, it anticipates.

Afghanistan’s population will nearly double, to about 50.5 million, making it home to the ninth largest Muslim population in the world.

Israel will become nearly a quarter Muslim. The Palestinian territories have one of the highest growth rates in the world.

Fractious Nigeria, where Christian-Muslim violence has left thousands dead in the past decade, will become a Muslim-majority country by 2030, the Pew Forum projects.

And two western European countries – France and Belgium – will become more than 10 percent Muslim. Sweden will hover just below that level, at 9.9 percent.

Iran, on the other hand, will see very slow growth. Iranian women have among the fewest children of anyone in the Muslim world. They use birth control at exactly the same rate as American women, 73 percent. 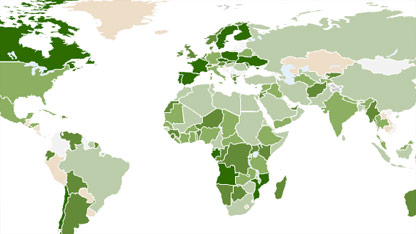 The Muslim share of the global population will rise primarily because of their relatively high birth rate, the large number of Muslims of childbearing age, and an increase in life expectancy in Muslim-majority countries, according to the report, “The Future of the Global Muslim Population.”

Conversion will play relatively little part in the increase, the report anticipates. It says little data is available on conversion, but what little there is suggests Islam loses as many adherents via conversion as it gains.

While the Muslim population is set to grow at a faster rate than that of the world as a whole, the rate of Muslim growth is slowing, Pew says.

“Growing but slowing” is the key phrase, says Alan Cooperman, associate director of the think tank.

“The increase in the last 20 years is greater than what we expect in the next 20 years,” he said. Muslim population growth “is a line that’s flattening out. They’re increasing, but they’re getting closer to the norm, the average.”

In other words, Muslims are coming into line with global trends toward fewer children per woman and an aging population. But, the report points out, because of the existing Muslim “youth bulge,” or unusually high percentage of young people, Muslim population growth has a certain momentum that will take decades to come into line with world averages – if it ever does.

The Pew report, more than a year in the making, is part of an ambitious attempt by the think tank to calculate the number of adherents to each of the world’s major religions. The Islam report comes first, and a Christian project is in the works.

They started with Muslims, Cooperman said, because they are “the largest group for which data was lacking, and we saw public interest in knowing more.”

Despite the rapid growth of Islam, Christianity seems set to remain the biggest religion in the world for the next 20 years. There are currently more than 2 billion Christians – 30 to 35 percent of the global population – making it very unlikely that there will be fewer than 2.2 billion Christians in 2030.

“There is nothing in these numbers to indicate that in 2030 there would be more Muslims that Christians,” Cooperman said.

In fact, both Christianity and Islam could be growing, both in absolute terms and as a percentage of the whole, he pointed out.

“We don’t want people to jump to the conclusion that if Islam is growing, everyone else is shrinking,” he said. “Christianity and Islam could both be growing at the expense of other religions.”

Sub-Saharan Africa is a case in point, he said.

“Tremendous numbers are being added in sub-Saharan Africa, but… Christianity and Islam are both growing rapidly. There is not a change in the overall proportions of Muslims to Christians.”

He’s aware that the report has policy implication, but insists that the purpose of the Pew Forum is simply to provide unbiased data.

“It’s not our role to say what should be done,” Cooperman said.

What they’re aiming to do, one of the project’s leader said, is to make sure there’s reliable information available.

“There has been a lot of speculation about the growth of the Muslim population around the world, and many of those who speculate don’t have good data,” said Brian Grim, a senior researcher at the Pew Forum.

For example, the report undermines the notion that Europe is heading toward having any country with a Muslim majority. The continent will be about 8 percent Muslim in 2030, it projects.

“The data that we have isn’t pointing in the direction of ‘Eurabia’ at all,” Grim said.

“The Muslim population is growing and slowing. Instead of a runaway train, it’s trending with the general global population,” he said.

Cooperman hopes that information will help make for more intelligent discussions, he said: “In the midst of heated debate and speculation, we think that solid, reliable, empirical estimates are valuable.”