Time to buck up, Singapore! 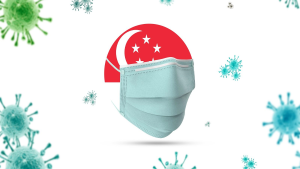 Singapore, May 17, 2021/Indonesia Media – If there is one country, which seemed to spar well with the invisible pandemic-assassin, is the little city-state Singapore. For months it had the mantra to keep the community cases to almost zero. Globally, it drew several accolades to an extent where it began exploring travel bubble options with countries of the same stature.

But it all went on a tailspin when the bubble burst with multiple clusters. Ironically, the first to be infected was a 46-year-old nurse from Tan Tock Seng Hospital on April 27. Over time, it was a grave concern when it spread and reports confirmed students tested positive from seven schools too.

Oh dear, you may say. But the Covid-19 “assassin” is back, stronger, with a number of unlinked cases reported. One of the most recent announcements is for the younger schooling generation with the implementation of full home-based learning (HBL) from May 19 to May 28, amid a sharp spike in Covid-19 cases in the community.

Singapore Education Minister Chan Chun Seng, one of the seven ministers who has switched portfolios in a major cabinet reshuffle announced on Apr 23, has an arduous task ahead of him. He said that some of the new mutations of the coronavirus are “much more virulent” and “seem to attack the younger children”. The B1617 strain appears to affect children more, added Minister for Health Ong Ye Kung.

At home, citizens are feeling jittery especially parents with young children. One parent, Linda Yang, a full-time working mother of two children said the recent announcement about attacking young children is very worrying. “I am seriously contemplating in not sending my children to full day child-care; yes, we will have difficulties and need to make immediate adjustments as either one of us (referring to her husband) have to be home. But ignorance is not bliss, and I don’t want to live with guilt.”

Business owners are seeing red too. A few days ago, higher risk setting such as gyms and mass participation events were suspended from May 8 to May 30 to minimise large covid-19 cluster formation. Followed by another rule where the government imposed restrictions on social activities and prohibition of dining in from May 16 until June 13.

Dismayed restaurant owner Steven Goh said: “I really thought this is over for us especially when we were back to our normal business. But now, only god knows. Most of my customers dine in because of the ambience and the setting. Now with takeaway, my revenue will be impacted greatly, by at least 70 per cent. I really don’t know if I can bite the bullet again.”

According to the leading English newspaper The Straits Times, as of May 13, the local Covid numbers are 61,451 cases with 31 deaths, 10 different variants of Covid-19 detected of which 12 active clusters. On paper, it looks like a drop in the ocean compared to the South-east Asia neighbours. But Singapore is not taking any chances and has further tightened the local restrictions.

With imported cases reported, the key challenge for Singapore is it can’t afford to close its border. Trade and travel is the lifeblood and it can’t afford to close unlike resource rich countries. This also extends to the much need workers for the Construction, Marine and Process sectors as well as foreign domestic workers to be brought in order to get the work going.

The high-alert is switched on. This is not just pandemic, but an “assassin” in all fronts. So the measures are much needed to ensure the numbers doesn’t trigger for another serious circuit breaker. (SS/IM)