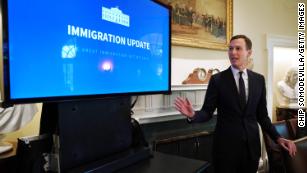 WASHINGTON, DC – JULY 16: Jared Kushner, senior advisor to his father-in-law U.S. President Donald Trump, makes a presentation about immigration during a cabinet meeting at the White House July 16, 2019 in Washington, DC. Trump and members of his administration addressed a wide variety of subjects, including Iran, opportunity zones, drug prices, HIV/AIDS, immigration and other subjects for more than an hour. (Photo by Chip Somodevilla/Getty Images)

The Supreme Court cleared the way for the Trump administration’s rule that dramatically limits the ability of Central American migrants to claim asylum to go into effect nationwide while the appeals process plays out.

Wednesday’s order is a major victory for the administration, which argued the rule was necessary to screen out “asylum seekers who declined to request protection at the first opportunity.”
“BIG United States Supreme Court WIN for the Border on Asylum!” President Donald Trump said on Twitter.
The rule, from the Departments of Justice and Homeland Security, prohibits migrants who have resided in or traveled through third countries from seeking asylum in the US, therefore barring people traveling through Mexico from being able to claim asylum.
Justices Sonia Sotomayor and Ruth Bader Ginsburg noted their dissent. Five justices were needed to grant the request; the votes of the others were not publicly announced.
“Once again the Executive Branch has issued a rule that seeks to upend longstanding practices regarding refugees who seek shelter from persecution,” Sotomayor wrote, joined by Ginsburg, later referring to “some of the most vulnerable people in the Western Hemisphere.”
“Although this Nation has long kept its door open to refugees — and although the stakes for asylum seekers could not be higher — the Government implemented its rule without first providing the public notice and inviting the public input generally required,” Sotomayor added.
The Supreme Court’s order is the latest move in a case that has bounced around between lower courts.
Late Tuesday night, a California federal judge’s attempt to issue a nationwide injunction on the asylum restrictions was blocked, in part, for the second time by the 9th US Circuit Court of Appeals.
Amid the back and forth, the Justice Department had asked the Supreme Court to step in.
In her dissent, Sotomayor criticized both the implementation of the new regulation and the majority for ruling before the 9th Circuit could fully resolve the government’s emergency request to put the district court’s injunction on hold.
“The court,” Sotomayor wrote, “side-steps the ordinary judicial process.”
Steve Vladeck, CNN Supreme Court analyst and professor at the University of Texas School of Law, agreed the justices are allowing the administration to “jump the queue.”
“Once again, the Supreme Court is allowing a controversial Trump administration policy to go into effect even as the legal challenges to the policy proceed through the lower courts,” said Vladeck.
The Trump administration has been harshly critical of what it sees as a relatively new judicial phenomenon where a single district judge halts a policy across the country before it can percolate through the lower courts and reach the Supreme Court.
Earlier this month, Attorney General William Barr wrote an opinion piece in The Wall Street Journal pointing out that 20 nationwide injunctions were issued during the Obama administration, while the Trump administration “has already faced nearly 40.”
He said that nationwide injunctions, create an “unfair, one-way system in which the democratically accountable government must fend off case after case to put its policy into effect, while those challenging the policy need only find a single sympathetic judge.”
The American Civil Liberties Union said in a statement that it will continue to challenge the rule. “We will continue challenging the ban on the merits, because it puts countless lives at risk,” said ACLU lawyer Lee Gelernt. ( CNN / IM )