Thanksgiving comes but once a year, but the stakes couldn’t be higher for making the pièce de résistance — a perfectly bronzed and juicy turkey.

Don’t take chances by making guesses on how to prepare the bird. We’ll show you exactly how to cook it for the best Thanksgiving ever.
.
Let’s start with the meal’s centerpiece. Here’s our time-tested advice for serving the perfect turkey.

How to buy turkey

Most of us purchase a whole turkey just a few times a year, but typically it’s for a special occasion so its key to shop wisely.
Whole
Modern commercial turkeys don’t contain much fat, yet, as we all know, fat is what provides meat with juiciness and flavor. To make up for it, some birds are “pre-basted” (injected with a solution), but our tasters found that these birds can have a “wet” texture.
Pasture-raised, organic turkeys promise a flavor improvement because of their diverse diet, but we didn’t find that to be the case, plus the meat was slightly stringier and tougher (you will need to brine these birds if you buy them).
Heritage turkeys are directly descended from wild turkeys, and they nearly disappeared in the mid-20th century as commercial Broad-Breasted Whites were bred by the poultry industry.
We have certainly found favor with the heritage turkeys that we’ve tried over the years, but given the range of taster opinion about flavor, from “outstanding” to “funky,” we aren’t sure the high price tag and effort it takes to track one down are worth it.
We like turkeys that have been koshered (covered in kosher salt, then rinsed multiple times). Koshering works to season the meat, improve its texture, and help it retain moisture — if you buy a kosher turkey there’s no need to brine or salt it.
However, kosher turkeys aren’t always easy to find, so we typically call for “all-natural” turkeys. These turkeys have been fed a vegetarian diet and are free to roam. These turkeys tend to contain less fat, which translates to a drier bird, so we always recommend brining these turkeys. 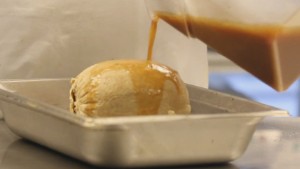 Suggested Cook’s Illustrated recipe: Roast Salted Turkey
Bone-in breasts
Most supermarkets regularly offer two slightly different styles of whole bone-in turkey breast
regular-cut turkey breast includes the whole bone-in breast with ribs, a portion of the wing meat and a portion of the back and neck skin.
The hotel-cut turkey breast is essentially the same cut, though it comes with its wings, neck and giblets, all important material if you intend to make a gravy or sauce to accompany the cooked meat. These tend to cost a little more and are almost always sold fresh, not frozen.
Whichever style you find and purchase, try to avoid turkey breasts that have been injected with a saline solution (a brine of sorts) — these are often called “self-basters.” We found the solution masks the natural flavor of the turkey. (If the only bird you can find is a self-baster, do not brine it, as the meat will already be quite salty.)
Also, ignore the pop-up timer that comes with some turkey breasts; the meat will be long overcooked before the popper pops. If your turkey has a pop-up timer, leave it in and gauge doneness according to an instant-read thermometer. Don’t remove the timer until the meat is done; otherwise it will leave a gaping hole from which juices will flow.

Four principles of cooking a bird

1. Brine or salt to increase juiciness
In the same way that you prepare to cook beef or pork, brining poultry in a saltwater solution boosts the flavor and juiciness of the meat. However, there’s a drawback to brining skin-on poultry: Because it’s soaking up liquid, achieving perfectly crisp skin is more difficult. In these cases, make sure to pat the skin as dry as possible prior to cooking. Alternatively, for some cuts you might opt to salt the poultry.
2. Cook white meat less than dark meat
Dark meat (thighs and drumsticks) cooks more slowly than white breast meat. This is mainly a result of the fact that dark meat is denser because it has more fat and proteins. To account for this difference when cooking a whole bird we’ve found it best to shield the breast meat to protect it from the heat by starting the bird either breast side down or with the breast to the side, then finishing breast side up.
White meat should be cooked only to an internal temperature of 160 degrees, while dark meat should be cooked to 175 degrees. Having a good instant-read thermometer is essential.
3. Crisp the skin or lose the skin
For many of us, crisp skin on a piece of turkey is the best part. And on the flip side, flabby turkey skin isn’t something anyone wants to eat (nor is it visually appealing). So either make sure the skin is crispy or remove it. The key to crisp skin is rendering all the fat that is between the skin and the meat. When roasting a whole bird, if you don’t want to serve the skin you can still keep it on while roasting to protect the delicate breast meat from the heat, but discard it before serving.
4. Let it rest
As poultry cooks, the juices are driven toward the center of the cut, so a resting period after cooking is essential to allow those juices time to redistribute evenly throughout. Logically, the larger the piece of poultry, the longer the resting time required. A big turkey needs 30 minutes.

Salting poultry in advance is one way to season the meat and keep it juicy. When salt is applied to raw poultry, juices inside are drawn to the surface. The salt then dissolves in the exuded liquid, forming a brine that is eventually reabsorbed by the poultry. The salt changes the structure of the muscle proteins, allowing them to hold on to more of their own natural juices.
Salting requires time, but it won’t thwart the goal of crispy skin. We prefer to use kosher salt for salting because it’s easier to distribute the salt evenly. We use Diamond Crystal Kosher Salt; if using Morton Kosher Salt, reduce the amount listed by 33 percent (e.g. use 2/3 teaspoon Morton Kosher Salt or 1 teaspoon Diamond Crystal).
For salting a whole turkey: Apply 1 teaspoon salt per pound evenly inside cavity and under skin of breasts and legs, wrap tightly with plastic wrap and let rest in refrigerator for 24 to 48 hours.
Brining works in much the same way as salting. Salt in the brine seasons the poultry and promotes a change in its protein structure, reducing its overall toughness and creating gaps that fill up with water and keep the meat juicy and flavorful. Brining works faster than salting and can also result in juicier lean cuts since it adds, versus merely retains, moisture.
But note that brining inhibits browning, and it requires fitting a brining container in fridge. We prefer to use table salt for brining since it dissolves quickly in the water.
— 1 whole turkey (12 to 17 pounds): Brine in 2 gallons cold water and 1 cup table salt for 6 to 12 hours
— 1 whole turkey (18 to 24 pounds): Brine in 3 gallons of cold water and 1 1/2 cups table salt for 6 to 12 hours
— 1 bone-in turkey breast (6 to 8 pounds): Brine in 1 gallon of cold water and 1/2 cup table salt for 3 to 6 hours ( CNN / IM )