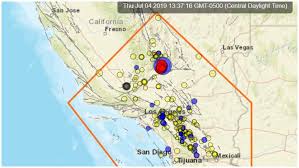 A 7.1-magnitude earthquake hit Southern California on Friday night — the second one near Ridgecrest in less than two days.

The latest earthquake occurred 11 miles northeast of Ridgecrest, according to the US Geological Survey.
It comes a day after a 6.4-magnitude earthquake centered near Ridgecrest rattled the state Thursday. That earthquake has produced more than 1,400 aftershocks, scientists said.
Multiple fires and injuries have been reported in Ridgecrest — about 150 miles from Los Angeles — after Friday’s earthquake, Kern County spokeswoman Megan Person told CNN. An emergency operations center is being set up in Bakersfield, she said.
In central Los Angeles, Friday’s earthquake felt stronger than the one a day earlier, making buildings rock back and forth forcefully. Donald Castle, who lives in Porterville west of Ridgecrest, said his house shook for between 20 and 25 seconds.
“It was more of a shake than what we had on the Fourth. It lasted longer and was more rolling,” he said.
The shaking was felt all the way in Las Vegas, much like the earthquake a day earlier.
The NBA Summer League game between the New Orleans Pelicans and the New York Knicks in Las Vegas was delayed Friday following reports of the quake. Scoreboards and speakers near the ceiling of the arena shook when the earthquake hit.
Public safety units are being deployed throughout the city ” to ensure safety and inspect infrastructure,” Los Angeles Mayor Eric Garcetti said.
Noted seismologist Lucy Jones said Friday both earthquakes are part of an ongoing sequence, of a “very energetic system.”
Officials are not ruling out that there could be more earthquakes coming. ( CNN / IM )