Here are 9 credit cards that industry experts told CNNMoney are among the worst in America for their sky-high interest rates and ridiculous fees. 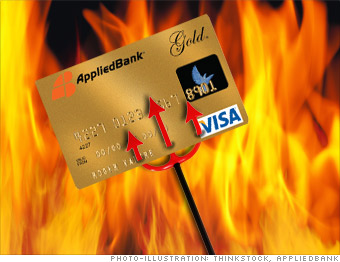 The Applied Bank Unsecured Visa Gold Card advertises a $500 line of credit and charges you an annual fee of $125 for the privilege. After the first year, that fee jumps to $180. Plus, the interest rate on the card is a high 29.99%.”Not only do they have one of the highest APRs in the business, they put a huge annual fee on it,” said Curtis Arnold, founder of CardRatings.com. “About three-quarters of credit cards don’t have annual fees on them, and if they do, they’re nowhere near this much.”

On top of the high rate and fees, the issuer doesn’t give customers any grace period, which is the time between the date of a statement and the date interest begins accruing. That means you pay interest immediately on any transaction you make, while other cards typically don’t start charging interest for several weeks.

A spokesman for Applied Bank did not respond to repeated requests for comment. 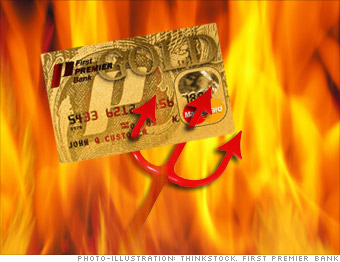 It doesn’t get much more expensive than First Premier’s card, which has an APR of 59.99% and fees of more than $120 a year.”You have to be awfully desperate to have that card and pay that kind of APR,” said Curtis Arnold, founder of CardRatings.com. “But I don’t know why you would do that when there are so many other options even if your credit is bad — even a secured card with all its fees would be a better alternative.”

The company, however, stands by its claim that it serves the needs of a growing number of consumers with less than perfect credit. And, in fact, it has nearly 300,000 customers for this card, most of whom carry a balance.

“The primary purpose of our credit card is to provide individuals (many who are at the lower end of the credit scale) with an avenue to obtain a tool to help them begin to demonstrate positive financial patterns to the major consumer reporting agencies,” a spokeswoman for the bank said. “There is a very large and growing need for credit in this non-prime, underserved market niche.” 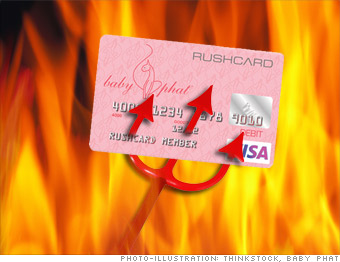 Many prepaid debit cards are loaded with fees. And the BabyPhat Rush Card is the worst out of a bad lot.It’s even more expensive than all of the RushCards, costing $14.95 just to own, while the three other Rush cards top out at $9.95

“The BabyPhat card allows its holder to make a statement,” said a RushCard spokesman. “Its distinctive pink facade is adored by those who want panache with their purchasing power.”

That panache costs: If you choose a monthly plan, you’re going to pay $9.95 per month plus a $1 per transaction if you use the card as debit instead of credit. Plus, there are hefty ATM fees and other charges.

If you instead choose the “pay as you go” plan, you avoid the monthly fee and instead pay $1 every time you swipe your card — up to $10 per month. If you don’t use your card for 90 consecutive days, you get hit with $1.95 fee. And the ATM fees are even worse.

“This is what I call the “plastic tax” because you’re so desperate to use plastic you’ll accept almost any terms,” said John Ulzheimer, personal finance expert at SmartCredit.com.

And you’re paying to use your very own money. Unlike a credit card, where a bank extends you credit, prepaid debit cards only allow you to spend what you’ve already deposited on the card.

Plus, even the worst credit cards report to the credit bureaus, so you can use them to build your credit. But prepaid cards don’t even do that.

“If you’re using this card because you’re in a pinch credit-wise, this isn’t going to help you re-enter the world of good credit,” said Ulzheimer.

But a spokesman for RushCard said 2.5 million consumers use its cards, attracting customers who are fed up with major banks or unable to open accounts. The BabyPhat Card is the most desired design, according to the company.

“As the prepaid debit card pioneer, the RushCard is committed to providing a better banking alternative for middle-class Americans who are affected by exorbitant, non-transparent bank fees,” he said. “RushCard is a financial empowerment tool that helps people manage their money better while providing access to financial services for all working Americans.” 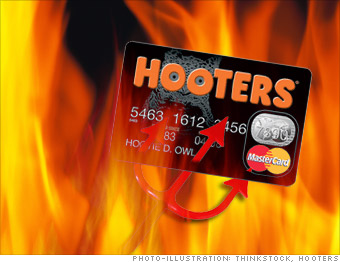 If you’re a regular Hooters customer, this card gives you five points for every dollar you spend at the restaurant. But that doesn’t make up for the fact that the APR on the card can hit 25.45%.The card, issued by Merrick Bank, also comes with an annual fee of up to $48 for the first year, plus $4 per month after that. Late payment fees, returned payment fees and over-the-limit fees go up to $35.

That makes this card among the worst in terms of restaurant-branded credit cards, according to John Ulzheimer, personal finance expert at SmartCredit.com.

“Even if you have excellent credit, it looks like you’ll get a rate of more than 16%,” he said. “You can definitely find a better card than that with excellent credit — and if you’re credit isn’t so good, you’re certainly going to get hit with that 25.4%.”

A spokeswoman for the card did not respond to repeated requests for comment. 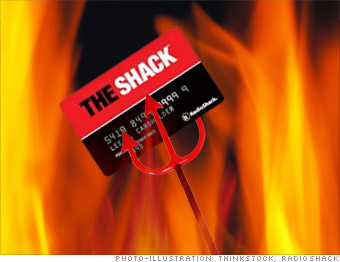 With a sky high rate of 28.99%, the Shack Card has one of the highest interest rate among store-branded credit cards.In fact, it ranks No. 1 on New York Congressman Anthony Weiner’s list of store cards consumers should avoid.

“This could maybe be appealing if you use the card correctly, but if you don’t have everything paid off by those dates, then you’re going to pay that interest and you’re going to get retroactive interest charges, so getting one of these cards can be awful,” said Bill Hardekopf, credit card expert and CEO of Lowcards.com. “If you don’t play the game right, you’re going to lose big time.” 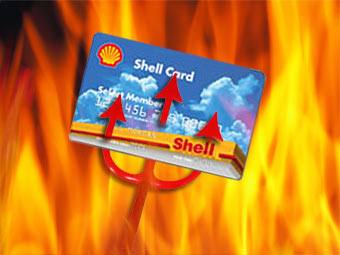 While opening a gas card may sound like it will save you money at the pump, the rates are among the highest in the credit card industry.Shell’s card has a 24.99% APR for everyone, even if your credit is squeaky clean. Plus it has a $25 annual fee.

While other petroleum cards, such as Conoco and Citgo, have similarly high APRs, they don’t charge an annual fee.

“This is a high interest card that you are lured to as a consumer because they’ll say you can get 5% back on certain purchases, so you think `Hey, cool,’ said Bill Hardekopf, credit card expert and CEO of Lowcards.com. “But they forget to tell you that, by the way, the interest rate is 25%. So you might be saving 5%, but you’re going to be more than paying for it with that APR.”

Only when you absolutely never carry a balance does the card start looking like a better deal.

A spokeswoman for Shell said the credit card, which is issued by Citibank, “offers good value for consumers on the go,” offering 10% cash back on certain hotels and 5% cash back on some airline and car rentals, along with a travel reservation service and discounts at certain hotels.

“If you’re a frequent traveler for business, you may get some good rebates, but for the average person that doesn’t travel a lot, this is definitely the worst gas card option,” said Hardekopf. 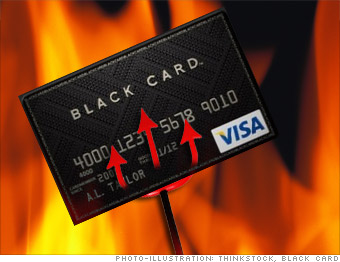 This card, which is made from carbon, looks pretty slick and “is guaranteed to get you noticed,” according to the card’s website.But it’ll cost you $495 per year to carry it. And it has a 14.99% APR, despite being aimed at consumers with excellent credit.

So what does that hefty fee buy you?

The benefits include a rewards program that offers 1% cash back for airfare on any airline. Customers also receive VIP access to more than 600 airport lounges worldwide and 24-hour concierge service to help with travel plans.

“A $495 fee is excessive using practically any definition of the word,” said John Ulzheimer, personal finance expert at SmartCredit.com. “Unless you’re a business traveler who lives in airline clubs, it’s hard to make a case in support of paying that fee, which incidentally is almost twice as much as I paid for my airline club membership.”

But Barclays, who issues the card, maintains that customers are happy with the trade off.

Many factors drive the card’s borrowing rate, annual fee, terms and conditions including the value of service, rewards and core benefits,” a spokesman said. “Cardholders have been very pleased with these benefits in exchange for the annual fee.” 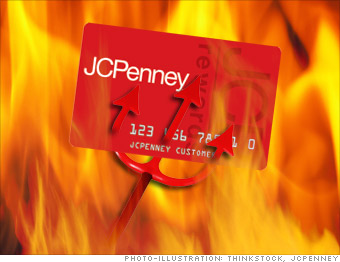 While cards like First Premier’s 59.99% Visa are targeted at customers with rotten credit, the scary thing about the JC Penney Card — and other retail cards — is that it gives you this high rate even if you’re credit is fine.The card comes with a 26.99% APR, the highest APR for any department store credit card, according to the Lowcards.com credit card index.

“So many shoppers get lured into applying for these cards because of instant discounts — to save 10% on that $200 item — but all of a sudden paying an interest rate of 27% more than overshadows that,” said Bill Hardekopf, credit card expert and CEO of Lowcards.com.

JCPenney cardholders get 10% off the first purchase on the store’s website. All cardholders are also enrolled in a rewards program where they can earn points toward a $10 off certificate each month and can attend special savings events throughout the year.

A spokeswoman for GE Capital, which issues the card, said these rewards make the card a good deal.

“To fairly assess the JCPenney Rewards credit card, one has to look at the entire value proposition,” she said, emphasizing that customers won’t have to pay interest unless they carry a balance. 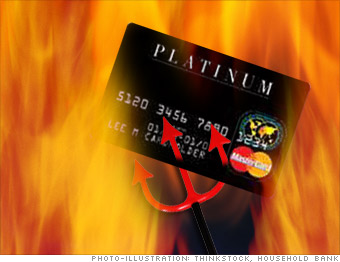 HSBC advertises the Household Bank Premium MasterCard as rewarding good credit. But this is actually one of the worst credit cards to choose if you have a strong credit history, said Beverly Harzog, credit card expert at Credit.com.First of all, the card touts its great cash back benefits, but customers only receive 1% cash back on purchases.

“For a cash rewards program, you’d hope it would be better than that,” said Harzog. “Typically with good credit you can get at least a couple percent cash back.”

Plus, after nine months of a 0% introductory rate, the APR soars to 19.9% for all customers — no matter your credit score. And the annual fee ranges from $0 to $39.

Customers with good credit — who typically have a score between 700 and 749 — can qualify for cards with much lower interest rates, including the Chase Sapphire card with an APR of 13.24%, for example.

“If you have good credit, there are much better choices to look at,” Harzog said. “I don’t think the 1% rewards makes up for the high interest rate and possibility of other high fees.”

But a spokesman for the issuer said the card’s benefits are most competitive for consumers with fair credit, despite the fact that its website advertises “good credit gets rewarded.”

“We believe our benefits, rewards and terms are competitive, particularly for those consumers with fair and recovering credit who may have had limited access to cards to cash-back rewards, promotional rates and no annual fee,” an HSBC spokesman said.