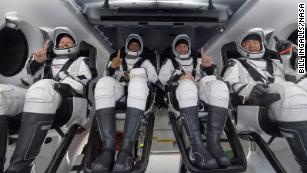 A SpaceX Crew Dragon capsule soared back from outer space Sunday morning and made a parachute landing in the Gulf of Mexico, returning four astronauts from a record-setting mission to the International Space Station.

The astronauts — NASA’s Michael Hopkins, Victor Glover, Shannon Walker, and Soichi Noguchi, an astronaut with Japan’s space agency — had boarded their Crew Dragon capsule Friday afternoon, and they spent all night aboard the 13-foot-wide, fully autonomous capsule as it conducted a series of engine burns and maneuvers to prepare itself for reentry.
The spacecraft fired up its engines to slice back into the Earth’s thick inner atmosphere around 2 am ET, and the capsule deployed a series of billowing parachutes to slow its descent before splashing down off the coast of Panama City, Florida at 2:56 am.
The astronauts’ safe return marks the end to NASA and SpaceX’s landmark mission, dubbed Crew-1, which set a record as the longest time in space — over 5 months — by a crew that launched aboard an American-built spacecraft.
This is only the second time SpaceX and NASA have ever brought astronauts home aboard a Crew Dragon spacecraft, following the historic return home of NASA astronauts Robert Behnken and Douglas Hurley from SpaceX’s Demo-2 mission in August. And Behnken had described reentry as the most gut-churning portion of the return trip.
The spacecraft becomes extremely hot due to the friction of air molecules rubbing against its exterior, though a thick heat shield will protect the astronauts inside as the vehicle roars toward its target: “It doesn’t sound like a machine. It sounds like an animal,” Behnken told reporters last year.
Enter your email to sign up for the Wonder Theory newsletter.
close dialog