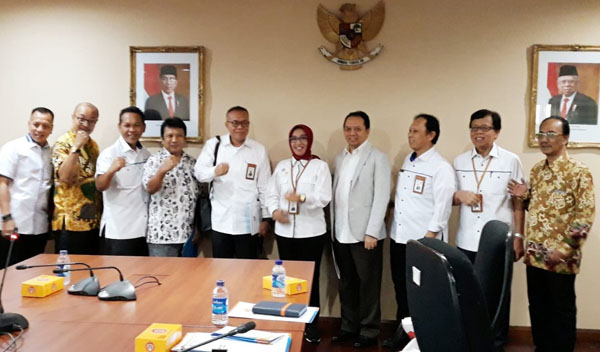 PT Garam held farewell and welcome party to the former finance director, Anang Abdul Qoyyum, and the newly appointed (director) Edi Masrianto. Meanwhile, the position of business development director is filled by Arif Haendra, and formerly by  Edward Hariandja. The party was held in the main office of PT Garam in Kalianget street, Sumenep Regency, Madura a few days ago.

Budi stressed the significant collaboration among stakeholders, provincial government, business associations, media companies, non governmental organization (NGO). Control and criticism against the company are expected to be constructive for PT Garam. Criticism should be based on facts and balance, such as news media that was tendentious. “otherwise, (tendentious news media) will do the credibility of the company a lot of harm,” said Budi Sasongko

He reiterated that the management has to face big challenge in which revenues decreased, and external variable would be the policy to profit. But the management would not focus on the problems such bad weather. Since rainy season affected the harvest of salt farmers in some areas including Madura. The price drop was another problem, hitting the farmers. “PT Garam is state owned company, is supposed to protect farmers from market loss during large harvest. We have to buy the salt from farmers. but we avoid to suffer big loss due to drop in price at the level of local salt farmers. We have to work harder to improve the system of absorbing farmers’ salt, warehouse receipt, distribution, logistics,” said Budi Sasongko.

In the future, PT Garam wishes to get Public Service Obligation (PSO), a form of subsidizing of regular purchase for local salt. In 2019 and so on, there should be a PSO that will be helpful to maintain price stability. “We can deal at any price, (PT Garam manages to purchase) in favor of offtake agreement for the next year’s purchase, and so forth,” said Budi Sasongko. (sl/IM)