Pope Francis has extended indefinitely the power of Catholic priests to forgive abortions, making the announcement in an apostolic letter released Monday.

It continues a special dispensation granted last year for the duration of the Year of Mercy — which finished Sunday — which gave all priests, rather than just bishops and specially designated confessors, the power to absolve the sin of abortion.
While the practical effect of Francis’ announcement remains unclear, it draws attention to the prevailing theme of his papacy: That the doors of the Church must remain open, just as God’s forgiveness and mercy extend to all those who repent from sin.
That said, the Catholic Church’s stance on abortion has not changed — it is still viewed as a “grave sin.” But it makes it easier for women who have had abortions to be absolved for their actions, and rejoin the church.
“I wish to restate as firmly as I can that abortion is a grave sin, since it puts an end to an innocent life,” the Pope’s letter states.
“In the same way, however, I can and must state that there is no sin that God’s mercy cannot reach and wipe away when it finds a repentant heart seeking to be reconciled with the Father.”
The letter continues: “May every priest, therefore, be a guide, support and comfort to penitents on this journey of special reconciliation.
“I henceforth grant to all priests, in virtue of their ministry, the faculty to absolve those who have committed the sin of procured abortion.”

Since the first century, the Catholic Church has held that abortion is a “moral evil.” The Catechism of the Catholic Church says that every human life “from the moment of conception until death is sacred” — and that any Catholic who procures an abortion incurs automatic excommunication, a penalty that often only a bishop could lift. 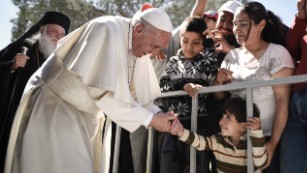 How Pope Francis is shaking up the Vatican
Saint John Paul II, whose papacy ran from 1978 to 2005, emphasized the traditional Catholic view on abortion, describing it as “murder,”and the church has been a strong force behind pro-life groups worldwide.
According to canon law experts, John Paul already extended to priests the power to forgive abortion in 1983 when he updated the code of canon law, but only a bishop could lift the excommunication. Some bishops allowed priests to lift the excommunication, creating a patchwork of practices and some confusion among clergy.
Kate D’Annunzio of Rachel’s Vineyard, a Pennsylvania-based group that ministers to women who have had abortions, said Francis has “clarified” that now priests have the power to do both: forgive and welcome women back into the church.
“We are extremely ecstatic that the Pope is recognizing that the decision women have made has harmed them in so many ways, and they want to be reunited with the Church.
“The Church has had the ability to forgive these women, but many of these women had difficulty forgiving themselves. This outreach by the Pope is saying ‘Don’t isolate yourselves, come back to the church.'”
Pope Francis initially introduce the church’s clarified policies last year when he said that priests around the world would be authorized to forgive the “sin of abortion” for the duration of the Church’s Year of Mercy, which ran from December 8, 2015 to November 20, 2016.
The Year of Mercy is a longstanding Catholic tradition during which believers may receive special indulgences for their sins.
“The forgiveness of God cannot be denied to one who has repented,” he said at the time, expressing sympathy for women who had been through the “agonizing and painful” decision to terminate their pregnancy.
In some regions, such as in the US and Britain, priests have been delegated the power to forgive abortion, but in most parts of the world only bishops have that authority.
Vatican officials last year described the temporary extension of these powers to priests as “a widening of the church’s mercy” — and indicated that it was possible they could be extended beyond the Year of Mercy, as has proved the case.

Priest: ‘Another gesture of mercy and welcome’

The Rev. James Martin, a Jesuit priest and editor-at-large at America magazine in New York, described Pope Francis’ announcement as “a significant one.”
Before the Year of Mercy, in dioceses in many parts of the world, special permission from a bishop was required to absolve the sin of abortion, he said.
“In the Year of Mercy, Pope Francis extended that permission to all priests for a year. Today he extended it indefinitely,” he said.
“It’s another gesture of mercy and welcome from a Pope whose hallmarks are mercy and welcome.”

Pope Francis has forged a more forgiving, merciful direction for the Church since his papacy began in March 2013, taking a more welcoming position toward groups that had previously found themselves on the margins of the Catholic establishment, such as gays and lesbians, and divorced Catholics.
“Overall he is trying to make it easier for people to be forgiven and feel forgiven,” said Martin. ( CNN / IM )