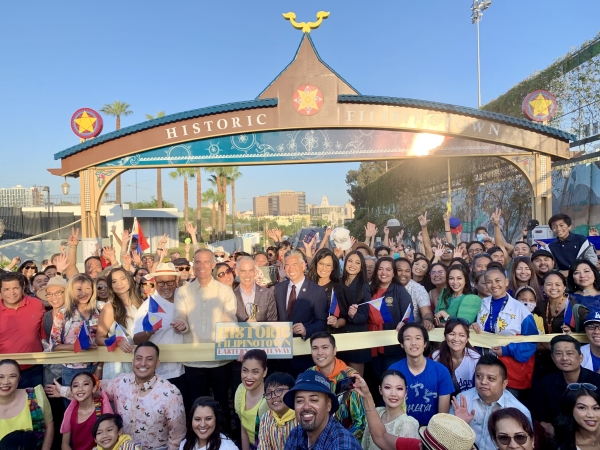 “At long last — the day has arrived, the gateway is here, and the amazing community of Historic Filipinotown can celebrate being the rightful home of the newest cultural landmark in our city,” said Councilmember Mitch O’Farrell. “This has taken a village, and it has been a labor of love. Most importantly, this process has been guided by the people of Historic Filipinotown. I want to thank the community for its partnership and perseverance, and for the privilege I have of being your representative. Historic Filipinotown is so deserving of such a beautiful landmark.”

“The story of our Filipino community is an important one — from the first Filipinos landing in the continental United States at Morro Bay over 400 years ago, to the manongs and manangs who led the farmworkers’ movement, to the changemakers of today fighting for racial, economic, environmental, and social justice,” said Attorney General Bonta, the first Filipino American statewide officer in California. “We’re a part of the fabric of this nation and the Historic Filipinotown Eastern Gateway — the Talang Gabay: Our Guiding Star — is an important, visible reminder of that reality. I want to thank the City of Los Angeles and Councilmember O’Farrell for recognizing Los Angeles’ Filipino community with this important monument.”

“The Historic Filipinotown Gateway symbolizes arriving, making the journey, and entering a gateway to our future. Monuments commemorating our diverse communities are significant, otherwise, we will suffer erasure of memory,” stated Councilmember Gil Cedillo.  “We must remember those who came before us, so we know our path to the future. I wish to congratulate my colleague, Councilmember Mitch O’Farrell, for his leadership in finding the resources to make this gateway happen. I’d also like to recognize the Board of Public Works and the City’s Bureau of Engineering for helping secure the funds and delivering this project.”

Officially called “Talang Gabay – Our Guiding Star,” the new gateway is 30 feet high and spans a width of 82 feet across Beverly Boulevard at its intersection with Belmont Avenue. The project was prioritized by the City’s Department of Public Works, led by Commissioner Emeritus Jessica Caloza, with management and oversight provided by the Bureau of Engineering. Designed by renowned Filipino artist Eliseo Art Silva, the monument is the largest of its kind in the United States. Design elements include: the Parol; the Gumamela flower also known as hibiscus, which pays tribute to frontline workers; and the Sarimanok — all symbols with deep roots in Filipino culture. The gateway also illuminates at night.

“This magnificent new gateway will welcome everyone to Historic Filipinotown,” said Eliseo Art Silva. “It’s a fitting tribute to the many courageous men and women on the frontlines — brave warriors such as our numerous Filipino healthcare workers. The gateway not only signals that Filipino Americans have finally arrived; it also symbolizes the valor of the front liners in our city.”

“FilAM ARTS is so proud to serve this community, and to have curated an amazing array of artists for this once-in-a-lifetime celebration,” said Giselle Tongi, executive director of FilAM Arts. “The Historic Filipinotown Eastern Gateway is a physical representation of the mission of FilAM ARTS: to cultivate a community of Filipinos and Filipino-Americans, rooted in our collective history and actively striving to represent, celebrate and express Filipino culture and our unique Filipino-American identity.”

The gateway is the culmination of two decades of visioning, planning, and organization by the Historic Filipinotown community, beginning with a community study of potential improvements commissioned in March 2003 by then-Councilmember Eric Garcetti. When O’Farrell took office in 2013, he worked with the Filipino American community to continue many improvements that were being advocated for by local stakeholders, including: the restoration of the “Gintong Kasaysayan, Gintong Pamana (A Glorious History, A Golden Legacy)” mural at Unidad Park, HiFi Highlights, beautification of the HiFi Western Gateway, and to identify funding  for the Eastern Gateway. Once O’Farrell led the Council in securing funding, the community was engaged in the design process. Renderings were released in June 2020, and construction began in March 2021.

Over the years, the project has involved many community leaders and community-based organizations, including longtime legacy non-profits in Historic Filipinotown such as the Pilipino Workers Center, Search to Involve Pilipino Americans, and Filipino American Service Group Inc.

“I’m overjoyed that this day has finally arrived when we can celebrate – together – the nation’s largest monument to Filipino-Americans right here in Los Angeles’ Historic Filipinotown,” said Cecilia Ramos, a longtime community leader in Historic Filipinotown. “Councilmember O’Farrell has always stood with our community, and I’m thankful that, through his leadership, a twenty year community vision has become a reality.”