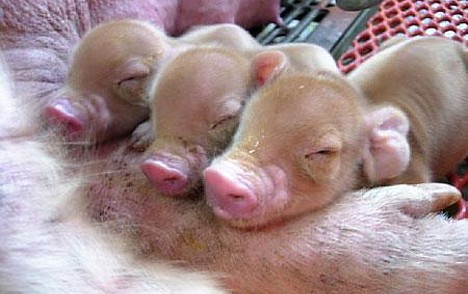 The European Parliament asked on Wednesday for a ban on the sale of foods from cloned animals and their offspring, the latest sign of deepening concern in the European Union about the safety and ethics of new food technologies.

The chamber, meeting in Strasbourg, France, also called for a temporary suspension of the sale of food containing ingredients derived from nanotechnology, which involves engineering substances down to very small sizes. Members were voting on legislation that would have regulated the sale of foods based on new production processes, including cloning. That legislation would have required companies to ask permission to market food derived from cloned animals.

But the chamber rejected that plan and instead called for separate legislation on cloning because of potential problems with the technology and concerns about animal cruelty.

“Although no safety concerns have been identified so far with meat produced from cloned animals, this technique raises serious issues about animal welfare, reduction of biodiversity, as well as ethical concerns,” said Corinne Lepage, a French member of the European Parliament.

Governments now will have to negotiate with European Union legislators to complete the rules, starting in September.

There are no European Union rules to specifically allow or ban dairy products and meat from cloned animals, according to a statement from the European Parliament.

Mr. Stevenson called for labels on all meat imports warning that the product might come from a cloned animal if no procedure could be devised to test it.