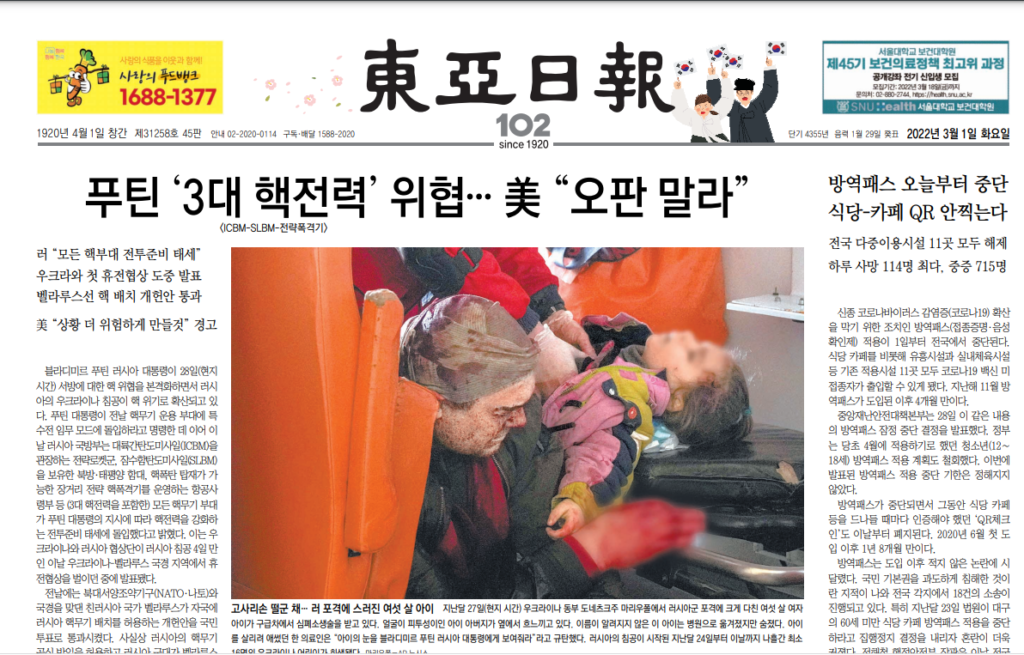 As the Western world rallies in its support for Ukraine, newspapers and broadcast media in Asia are offering a more nuanced perspective in line with their country’s dealings with Russia.

Both China and India — along with Vietnam, Laos, Bangladesh, Pakistan, and several African and South American countries — abstained from voting March 2 on a United Nations General Assembly motion to demand an immediate end to Russia’s invasion of Ukraine, which began Feb. 24.

News of the vote did not make the front page of China’s most-read newspaper, the China Daily. News of the invasion could only be found by using the search engine on the newspaper’s website.

Rong Xiaoqing, a veteran reporter with Sing Tao Daily who covers Chinese American news from New York, noted that Chinese media are largely state-owned and tend to tow the Beijing line. There are repercussions for editors and reporters who step outside the lines, she said, noting that journalists who speak out are often fired and replaced.

The Chinese government has been ambiguous on the crisis, she explained, noting that China has twice abstained on the UN vote to censure Russia, but at the same time signed an agreement on Feb. 4 highlighting the “friendship and unlimited cooperation” between the two countries.

But China may be rethinking its signing of the so-called friendship treaty, reported The Wall Street Journal on March 3.

“Elevating the partnership with Russia on the eve of its invasion of Ukraine was a massive foreign-policy blunder by Xi,” Jude Blanchette, a China specialist at the Center for Strategic and International Studies, told the publication. “The cost is very real for China and is exposing the limits of Xi’s policy.”

By contrast, India’s media have covered the conflict from both sides of the issue, said Lalit Jha, the U.S. Bureau Chief for the Press Trust of India, the country’s largest news agency.

“India’s media are not at all influenced by government policy,” he said, noting that — even as India abstained from the UN vote — media reflected the voices of the country’s residents, who showed enormous support for the people of Ukraine.

Multiple newspapers — even vernacular language publications — have sent their reporters to Kyiv to cover the invasion first-hand, said Jha, noting this is the first time he has seen this happen during his many years with the Indian press.

Coverage of Ukraine is overshadowing local Assembly elections, which are currently taking place in the states of Uttar Pradesh, Uttarakhand, Punjab, Manipur and Goa. Indeed, The Times of India’s website’s front page March 3 displayed six stories on the Russia-Ukraine conflict, but nothing on local elections.

Jha said he has not come across publications directly supporting Russian President Vladimir Putin but noted numerous op-eds questioning whether India should have voted differently in the UN.

Jong Won Lee, a correspondent for the Korea Daily who is based in Atlanta, Georgia, said South Korean media have been prolific in their support for the people of Ukraine. “It is very similar to a situation we ourselves faced more than 100 years ago,” he said, referring to the 1904 war between Russia and Japan to take control of Manchuria and the Korean Empire.

“We feel what the Ukraine people feel, and we understand their situation,” he said.

However, some media in Asia have pointed out that western media have covered the invasion of Ukraine with more ferocity than similar crises going on in non-European countries. “Every life should have the same value,” said Jong Won Lee.

Vietnamese American reporter Andrew Lam noted that Vietnamese publications have a soft spot for Putin who is referred to as “Uncle Putin.”

Russia has deep ties to Vietnam’s energy sector.  Almost 30 percent of crude oil and about 25 percent of gas in Vietnam are exploited by enterprises linked to Russian investment, including companies like Zarubezhneft, Rosneft, and Gazprom, said Lam.

Vietnam abstained from the UN vote to censure Russia.

Vietnamese media have focused chiefly on the Vietnamese population in Ukraine. Before the invasion, many Vietnamese in Kyiv had voiced urgency at the need to evacuate, said Lam.