These odd diversions make for family fun on your all-American summer road trip.
Arresting roadside oddities have been around for more than a century, the catalyst for their creation the ever-decreasing attention span of the average motorist. Since the days of Henry Ford, cars and their occupants have hurtled by at increasing velocity. To sell their wares, many highway retailers created giant architectural follies to evoke the goods sold inside: teahouses were represented by giant teapots, hot dog stands resembled hot dogs, Muffler Men held mufflers…it all made a weird kind of sense.

But what do a ball of string, an avenue of birdhouses, or a cement troll have to sell? It turns out that some of the most unfathomable roadside attractions are also the most fascinating. And while not many people would be tempted to drive four hours to visit the second largest ball of twine–as Clark Griswold (a.k.a. Chevy Chase) did in the film National Lampoon’s Vacation–any long-distance driver can attest that after hours at the wheel, twine of any size becomes a strangely appealing diversion.

From Seattle to Rhode Island, these all-American roadside attractions are sure to stop you in your tracks. 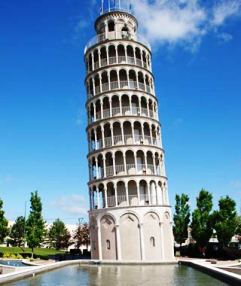 A half-scale replica of the Leaning Tower of Pisa, this is water-tower art par excellence. Created by industrialist Robert Ilg in 1934, the tower teeters precariously on the main thoroughfare of Touhy Avenue above two swimming pools, in what used to be the company’s recreation park. Today, the tower has become a focal point for the small community, with concerts and an ever-expanding water park. Proving that flattery will get you everywhere, the unlikely bond with Italy was consummated in 1991, when Niles and Pisa became sister cities. 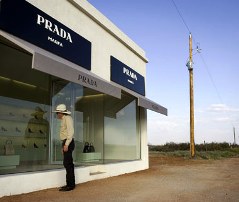 It may be hard to find a gas station on this empty stretch of U.S. 90, but at least there’s a store with high-end accessories: 20 left-foot shoes and six purses, to be exact, visible through the store’s front windows. Located 150 miles southwest of El Paso, the Prada store, which “opened” in 2005, with the blessing of Miuccia Prada herself, is the creation of Berlin artists Michael Elmgreen and Ingar Dragset. Fashionistas might want to save themselves the trip, though: the door is permanently locked, and the only sign of life is a growing population of moths.

Frank Stoeber started winding twine in his basement in 1953. Determined to outdo the mighty 12-foot-wide Johnson Twine Ball in Darwin, MN, he labored tirelessly until his death in 1974, finishing one foot short of his goal. Since then, residents and tourists visiting Cawker City have been adding to Stoeber’s ball in the annual Twineathon held in August. It now weighs a hefty nine tons and measures 40 feet in diameter. The twine is not without controversy: twine ball purists complain that, much like running the marathon, twine balling should be an individual pursuit. 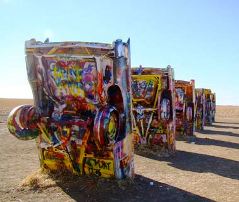 This graveyard of 10 Cadillacs dating from 1949 to 1963 documents the glory years of the ostentatious tail fin. Constructed in 1974 by three artists, Hudson Marquez, Doug Michels, and Chip Lord (collectively known as Ant Farm), the prescient installation also manages to allude to the rise and fall of the American automotive industry. Located on I-40, outside of Amarillo, TX, Cadillac Ranch is a wholly interactive exhibit. Visitors are encouraged to bring paint, markers, or whatever other medium they like to add to the graffiti and be part of the ongoing conversation. 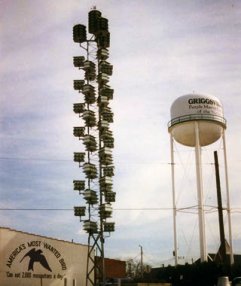 Once upon a time, Griggsville, IL, was jammed between a marsh and a boggy place. Until 1962, this town on the Missouri and Illinois rivers faced an annual mosquito plague of biblical proportions. That’s when local resident and antenna manufacturer J. L. Wade observed that purple martins not only liked to inhabit the eaves of local houses, but they were also eating up to 2,000 mosquitoes a day. Wade quickly turned his antenna factory into a birdhouse production line. Today, 5,000 birdhouses (some as tall as 70 feet) line Quincy Street, which has been renamed Purple Martin Boulevard in honor of the town’s newfound feathered friends. 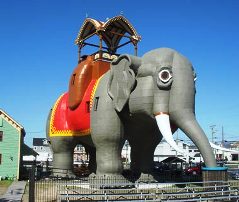 Lucy the Elephant’s original role, back in 1882, was to sell real estate. In fact, she’s the first example of zoomorphic architecture in the U.S. and has the patent to prove it. Located in Margate, NJ, this much-loved roadside folly is artfully crafted from wood and tin and has proved far more versatile than her creator imagined. At 65 feet tall, and housing a spacious hall, Lucy has at various times served as a bar, an office, and a summer home. 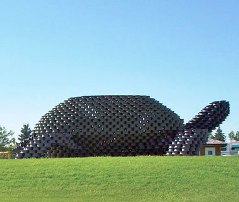 What do you do with 2,000 old wheel rims? Turn them into an 18-foot-tall turtle, of course! Built in 1982 by George Gottbreht, owner of Dale’s Thrifty Barn, a convenience store, motel, and restaurant all rolled into one, the turtle pays homage to nearby Turtle Mountain State Park. For a time, the rather abstract shape was mistaken for a lizard, so Gottbreht added a motor to imbue the head with some turtle-y motion. Something of a chameleon, the turtle dons a red Santa Claus hat during the holiday season. 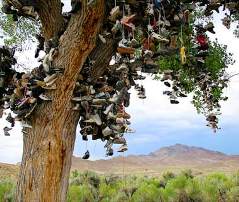 Legend has it that a couple of newlywed campers were embroiled in an argument under this cottonwood tree in the 1980s. She threatened to walk out so he lofted her shoes high into the branches and cooled his heels at a bar in nearby Middlegate. The couple made amends, and when they had their first child, they returned to this lonely stretch of Highway 50 to add a pair of baby booties. Inspired, others soon followed suit. Now the tree’s boughs are heavy with thousands of pairs of footwear dangling from their laces like ripe cherries. 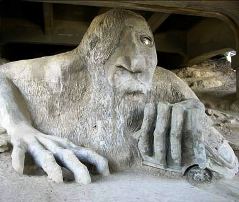 In the shadow of an overpass in the Seattle suburb of Fremont lurks a giant one-eyed troll clutching a Volkswagen Beetle. The two-ton sculpture was created in 1990 by a team of four local artists, Steve Badanes, Ross Whitehead, Will Martin, and Donna Walter, as part of a competition promoting urban renewal. The ugly ogre was originally overlooked by the judging committee. But it charmed locals, winning the popular vote and the right to haunt the underpass forevermore. 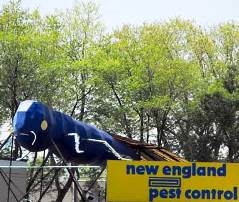 The Big Blue Bug was built in just four days in 1980 to sit atop New England Pest Control in Providence. This ungainly sculpture–which bears closer resemblance to a turnip–was named Nibbles Woodaway in a radio competition and since then has seen no end of controversy. He’s been shot at, proposed beneath, featured in the film Dumb and Dumber, turned into a tattoo, and even was the subject of a lawsuit. Much like the bugs he represents, he’s almost impossible to get rid of.