Las Vegas — In the brutal heat, Mike Forizs ventures out of his North Las Vegas home to take out the trash.

“If I go over and look at the house on the corner, there are broken windows,” he says. It appears to be a party hangout, with empty booze and soda bottles that can be seen through a broken pane.

“People don’t care when they’re getting ready to leave.”

Welcome to one of the top foreclosure areas in the nation, the sunny Las Vegas area.

There are plenty of “For Sale” signs, up and down the street. Front doors are littered with tacked-on notices: “You are in danger of losing your home. Your home loan is being foreclosed.

“This property has been determined to be vacant and abandoned.”

Some houses get stripped of whatever valuables are inside, from pipes to door hardware. It’s impossible to know if the occupants took things with them, or if the empty houses fell to vandals.

The neighborhood of single homes and garages was built in the early 2000s when Las Vegas was the fastest-growing metro area in the nation. Nevada was theÂ fastest-growing stateÂ from 2000 to 2010.

The area still looks new. There are no cracks in the streets, sidewalks or driveways, and the slow-growing desert landscape doesn’t hurt the curb appeal. 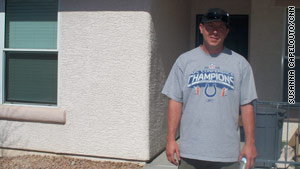 But the recession hit Vegas hard. Nevada’s foreclosure rate has led the nation for more than four-and-a-half years; about 1-in-4 homes in the Vegas area is in some foreclosure process.

Prices have dipped by 40% or more. It means turnover and uncertainty for residents such as Forizs.

“A couple of the neighbors have already moved out because of foreclosure. There’s like three or four (other houses) just on this little block that are empty already. And there’s a couple neighbors” trying to refinance, Forizs says.

It does mean an upside for buyers, of course, including Forizs, who moved here a few months ago. His split-level home originally sold in the mid-$300,000s. Forizs bought it for $95,000.

“Guy let it go,” he says of the last owner. “The banks weren’t working with him.”

Las Vegas’ foreclosure rate — one of every 118 housing units received a foreclosure filing August — is a symptom of all the excesses of the American housing boom, but with shows, gambling and bright lights in easy reach.

The downside of that tourism-driven economy: Vacationers and convention-goers spend less or don’t come at all. Residents who relied on tips to make the house payments found themselves unable to keep up. Unemployment is stuck in double digits.

Of all the homes sold, about a quarter are short sales. The borrower owes more on the mortgage than the house is worth.

George McCabe, a public relations executive who works with the Greater Las Vegas Association of Realtors, shakes his head. A lifelong resident, McCabe is contemplating his own neighborhood.

“I lived in it through the boom, when my neighbors would gather around the mailbox and say, ‘We all paid about three (hundred thousand dollars) and we can sell for 550 (thousand dollars). Isn’t that amazing? Wow! We’re all sitting on a gold mine.'”

To boot, many of those neighbors, like many around the country, borrowed heavily on their equity. 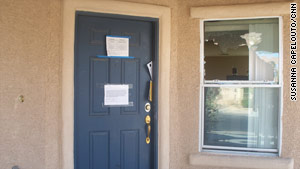 A notice on the door of a North Las Vegas home says it’s vacant. The windows have been broken out.

“Now,” McCabe says, “they stand around the mailbox talking about who may or may not be in danger of losing their homes to foreclosure or who’s talking about walking away from their loan.”

Juggling the stats is Paul Bell, president of the Greater Las Vegas Association of Realtors.

“Some areas have declined as much as 75%” in home value, he says.

Now, a new trend emerges: More than half the homes sold here are cash transactions. That’s a sign that speculators and investors are waiting for the next boom. In the meantime, they turn the houses into rentals.

The association lost more than 6,000 members since the start of the recession in 2007.

But Bell likes to point to a recent slow rise in home sales and prices.

He said he’s hoping that the worst in foreclosures is over.