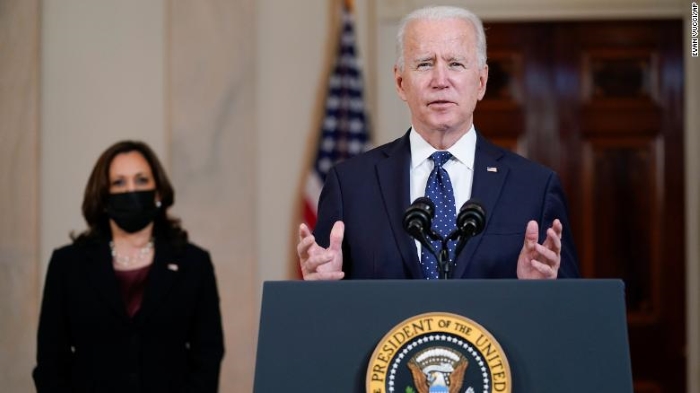 President Joe Biden said Tuesday the country could take a step toward racial justice after a jury found a former Minneapolis police officer guilty of murdering George Floyd in a case that was closely watched around the world.

Biden called the verdict in the Derek Chauvin case “a giant step towards justice in America” but added that much more needs to be done in his first remarks since the verdict.
Calling systemic racism “a stain on our nation’s soul,” Biden said he was heartened by the jury’s verdict, the testimony of other police officers against Chauvin throughout the trial and the collective realization about the reality of systemic racism worldwide that has taken place since Floyd’s death. But Biden recognized that none of that progress, or Chauvin being found guilty, would bring Floyd back.
“Nothing can ever bring their brother, their father back, but this can be a giant step forward in the march towards justice in America,” Biden said.
The President adding that the verdict in this case is “much too rare” and at the same time “not enough.”
“For so many people it seems like it took a unique and extraordinary convergence of factors. A brave young woman with a smartphone camera. A crowd that was traumatized,” Biden said adding that the murder lasted “almost ten minutes.”
“Black men, in particular, have been treated throughout the course of our history as less than human. Their lives must be valued in — our nation. Full stop,” Biden added.
Vice President Kamala Harris spoke before Biden’s remarks and said lawmakers now need to take up legislation that will reform policing in America, calling it a part of Floyd’s legacy.
“Today, we feel a sigh of relief. Still, it cannot take away the pain. A measure of justice is not the same as equal justice,” Harris said.
The White House said Biden, Harris and staff watched the verdict from the Private Dining Room in the White House. A senior administration official described the reaction inside the private dining room as “a collective exhale. From everyone. Then the collective recognition that so much more work needs to be done. But overall just a sweeping sense of relief.”
After the verdict was announced, Biden, Harris and first lady Jill Biden spoke with George Floyd’s brother, Philonise Floyd, from the Oval Office. Biden also spoke with Democratic Minnesota Gov. Tim Walz.
In his call to Floyd’s family, Biden said, “Nothing is going to make it all better, but at least now there’s some justice.”
He said he would bring the family to the White House and quoted Floyd’s daughter Gianna, who told Biden at her father’s memorial that he would change the world.
“He’s going to start to change it now,” Biden said on the call.
The President said the verdict could “be our first shot at dealing with…systemic racism.”
“We were watching every second of this,” he told the family of the trial. “We’re all so relieved.”
Harris added, “History will look back at this moment and see it as an inflection moment.”
In light of an impending verdict in the trial, the President’s previously planned remarks on the American Jobs Plan were rescheduled and the new speech was planned.
There was different language prepared for various outcomes in the trial, though all versions included acknowledgment of the outpouring prompted by Floyd’s death. Aides have been working on the language for a presidential statement over the course of the past week or so.
Biden called on the country to continue to listen to the cries of activists who have sounded the alarm about police brutality in the months since Floyd’s death.
“We have to listen. I can’t breathe. I can’t breathe. Those were George Floyd’s last words. We can’t let those words die with him. We have to keep hearing those words.”
Earlier Tuesday, Biden said he was “praying the verdict is the right verdict” and suggested there was ample evidence for the jury to consider as they determine whether Chauvin is guilty of murdering Floyd.
“It’s overwhelming, in my view,” Biden said in the Oval Office, where he was meeting with Hispanic lawmakers. “I wouldn’t say that unless the jury was sequestered.” ( CNN / IM )