Thailand’s King Bhumibol Adulyadej, a revered and unifying figure who embodied the nation in his 70-year reign, has died aged 88.

The announcement came in a statement from the Royal Palace read on state TV Thursday, and followed a days-long outpouring of support since the king was hospitalized on October 3. He underwent medical procedures over the weekend.

The king died at 3:52 p.m. local time and passed away in a “peaceful manner,” the Royal Palace said, as thousands waited outside the hospital where he lay in nervous anticipation of the news
.
King Bhumibol ascended to the throne 70 years ago, making him the world’s longest-reigning living monarch, before his death.
Crown Prince Maha Vajiralongkorn is the king’s appointed successor, but exactly when he will ascend to the throne is unknown.
Thai Prime Minister Prayut Chan-o-cha said “he needs time to jointly mourn with Thai people.”

Hundreds of people had for days gathered at Bangkok’s Siriraj Hospital where the king was being treated, and as the sun began to set, the crowd swelled into the thousands. 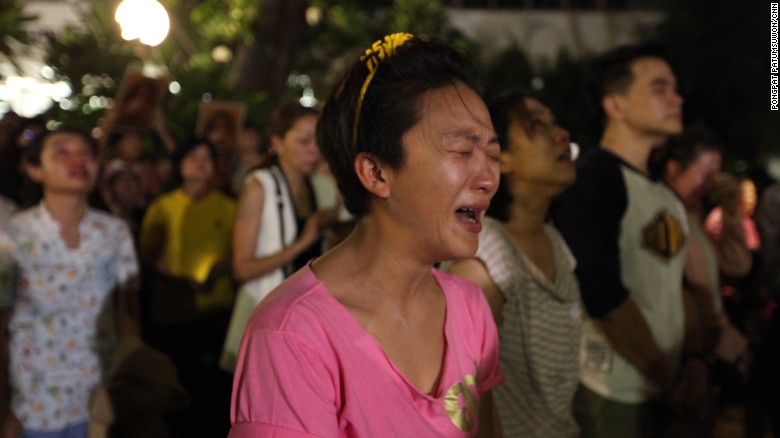 A Thai woman cries upon hearing that the nation’s monarch had died.
They were dressed predominantly in pink — an auspicious color believed to restore
health — and yellow, which is the color of the King, based on the fact he was born
on a Monday.
Some outside the hospital said they didn’t know where else to go for comfort, and
many said they had hoped he would live to 120.
“I just wanted to be here and pray for my king with others,” said May, a 22-year-old
university student.( CNN / IM )

One thought on “Thai King Bhumibol Adulyadej dies at 88”